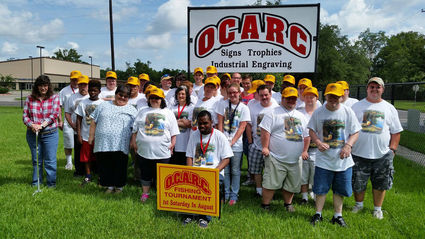 OCARC will host its 31st annual fishing tournament and fundraiser Aug. 3-4 with certifications starting at 3 p.m. Saturday, Aug. 4 at the city of Orange Boat Ramp. Weigh-in starts at 5 p.m. on Aug. 4. Over time, the fishing tournament has grown to 50 sponsors and co-sponsors.

One of the longest held and most successful area fishing tournament is about to cast off.

The OCARC Annual Fishing Tournament and Fundraiser will be held Aug. 3-4 with certifications starting at 3 p.m. Saturday, Aug. 4 at the city of Orange Boat Ramp. Weigh-in starts at 5 p.m. on Aug. 4.

John Thomas has been the OCARC director for 44 years. He said the tournament got its start when they made fishing lures under the name Sabine River Tackle.

"We got famous doing them," Thomas said. "However, we were losing $.14 a piece to make them. DuPont gave us our first engraving machine in 1960.

"We were founded in 1956 by concerned parents. We were looking to make some money."

Over time, the fishing tournament has grown to 50 sponsors and co-sponsors.

"The kids of our kids are now fishing at this. We're mainly a family fishing tournament. We've had a good run," Thomas said.

Furthermore, a kayak will be filled with fishing gear. Kids younger than 16 who go up on the stage for the weigh-ins can enter a drawing for a chance to win the kayak and the gear.

Additionally, all kids will receive a participation trophy.

There will be a $250 for the big speck, the big bass, the big flounder and the big redfish. There is a $2,950 payout in 12 categories during weigh-in.

The Appaloosa Red Fish with the most spots has a $250 prize for one winner. This is a bonus fish that can be re-entered in the tournament. The redfish must be from 20 inches to 27 inches, black drum must be from 14 inches to 29 inches. This event is sponsored by Gopher Industrial.

Their mission statement reads OCARC, Inc., a private non-profit organization, was founded in 1956. Realizing the need for Vocational Training for special needs adults, a group of concerned parents and citizens formed the organization.

OCARC, Inc., a 501c3 private non-profit organization, was founded in 1956. The original Workshop started in the home of Cathryn Boyd. It was later moved to the Thomen Center, located in Orange. After an apparent need for more room, the Board members started looking for a permanent facility for the OCARC Workshop. In the late 60's Mrs. Nelda Stark donated property at the current location. Money was raised by the citizens of Orange County to erect the current facility.

Since 1971, OCARC, Inc. has expanded with other Workshop extensions, serving around 70 adults daily and a staff of 15. OCARC, Inc. has now been in the industrial engraving sign business for over 50 years, and makes all types of signs, desk sets, name pins both in plastic and metal, banners, and a number of other products.

OCARC, Inc. is funded in part by the United Fund, but our Workshops try to be as self-supporting as possible through the products we produce. In the spirit of trying to be totally self-supporting, other products have been included in our business, such as: Trophies, Plaques, and Industrial Signs.

"Our goal is to make the client as self-sufficient as possible. Hopefully we can train them so they have enough skills to get a job in the private sector and lead a normal, productive life in society. With your help and business, we will continue to accomplish this goal," it stated.