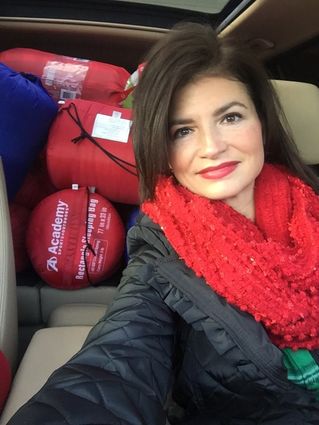 Shilo Taylor, with LOVE Lunchsack Ministry, a ministry to the homeless, said heat takes a toll on the homeless much like the cold does. She said the homeless seek shelter from the heat in thee shade, in libraries and other public places, particularly in the middle of the day.

You don't need a newspaper to tell you it's hot outside. But imagine living in this heat without a place to stay.

For the homeless population, they don't have to imagine. They suffer through it everyday.

The homeless are thought of during frigid temperatures, but what about during scalding temperatures?

Shilo Taylor, of Bridge City, with LOVE Lunchsack Ministry would know. She's been ministering to the Golden Triangle homeless population since 2009. Though they help in all of the cities, their primary location is in Beaumont with a satellite branch in Orange, manned by a couple of volunteers.

Monthly they serve sack lunches and bottled water to the homeless and anyone else they come into contact.

"They may be individuals in poverty with no A/C. During the summer we pass out additional water. For outdoor activities we gave out popsicles. One year I rented out an ice cream truck to give out treats," she said. "We take donations for baseball caps, sun screens and lip balm. We definitely give out mosquito spray and make sure that is passed around. We give out backpacks when we have them and give out toiletries if they need them."

Taylor said heat exhaustion is common among the homeless.

"The homeless are much more adapted than people who have the privilege of living indoors and they're resourceful. They'll stand under the shade, or go into the library or an indoor public place. You often won't find the homeless out in the middle of the day. Some get too hot and they have to go to the ER. Some have tents or awnings and some stay in abandoned buildings," she said.

When it gets too hot or too cold, local resources will open their door and offer a reprieve from the elements.

"The heat index can be dangerous for anyone," Taylor said. "People can come home to their indoors and cool off with a shower or go into a swimming pool the homeless can't access. They (the homeless) don't have a fan or an A/C to sleep under at night.

"People can become dehydrated very easily and it can cause dizziness."

When Taylor first started her ministry, she said there weren't too many others who were doing homeless ministry. She would go to different churches and organizations to tell them about her ministry and teach them about street ministry. Now, lots are helping the homeless and covering the area.

Taylor, furthermore, said she had a supernatural start to her ministry.

"I've always had a heart for the downtrodden," Taylor said. " The Lord gave me a vision in 2009 of a brown paper bag with a red heart on it and told me, 'Show My love.'"

She added that her ministry is not about converting the homeless or preaching at them; it's about "Feed and be loving."

"I'm obedient to that," she said. "I bulk emailed my contacts when I started, those in church and not in church. They gave donations, food and offered their help. Their response was overwhelming. We have never lacked."

Sandy Trevino Wigley, started doing street ministry with Taylor nine years ago. They first started in Beaumont. Trevino Wigley then went to Port Arthur to minister for four years. When she move to Orange County she started Taking It To the Streets ministry in Vidor six months ago.

She and others make more than 75 sack lunches and take to impoverished areas for lunch and to pray with the people. They also participate Church in the Park where sack lunches and hot food is served and the Christ for LIfe Festival where clothes, food and toiletries are given out.

One volunteer told her some people are so impoverished, it's like a mission to a Third World country. Many residents had no money to repair their homes after Tropical Storm Harvey or their landlords didn't make repairs. Some of the homes have mold inside and some have no air conditioning. Some moved on to abandoned buildings.

During these hot days, Trevino Wigley brings water with the food. She said fortunately none of the elderly she has encountered were without air conditioning. Some younger people, however, don't have air conditioning and they're forced to become acclimated to the heat.