Bids open for old BC Police building on Texas Avenue 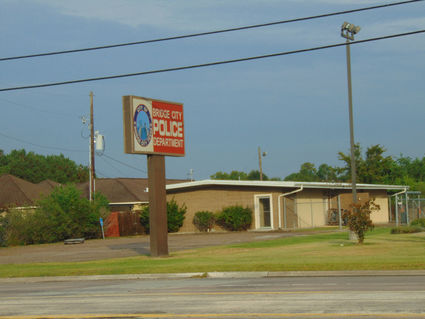 Now that the Bridge City Police Department have been in their new digs at Texas Avenue and Ferry Drive for more than a year, it's time to do something with the old building on Texas Avenue next to Chicken Express.

A public notice by the city of Bridge City read they are in the process of receiving separate sealed bids for the old Bridge City Police Department building at 2290 Texas Avenue that will be received by the city at city hall, 260 Rachal St., in Bridge City, until 2 p.m. on Aug. 13. Bids will be publicly opened and read aloud at 2 p.m. at city hall.

The details include an eight block lot, a 2,700 square foot building with a foyer with a half bath, nine offices, two hallway access restrooms, a kitchen, several closets and a large rear room for meetings.

Site improvements include front and rear yard parking areas, wood fences along the side and rear property lines, electronically controlled sliding gate, 1,600 square foot of metal carports, eight covered spaces and a natural gas generator with 100 percent capacity of operation of the building should the electrical service be interrupted. Theres is also a storage building on the bcd side.

Appointments can be arranged to tour the facility by calling city hall between the hours of 8 a.m.m to 5 p.m. and by speaking with Jerry Jones, city manager, or with Jeanie McDowell, director of purchasing. The city of Bridge City reserves the right to waive any formalities or technicalities and to reject any or all bids.

An earlier Record article from 2016 read the project was taking shape as the frame of the 6,000 square foot building had already been built.

“The building our police department uses right now is way too small for their needs,” said Jones. “Not only is the layout of the building not what they need, but the biggest issue is traffic. There is only one entrance and exit off of Texas Avenue and that can be really difficult at times.”

The new Bridge City Police Department is being built in the 500 block of Texas Avenue, that is directly behind the RaceWay fuel location opposite Ferry Drive.

The site will cover approximately 3.285 acres, all of which was donated to the city by resident, Dr. S. Mark Messer.

“We are very fortunate to have someone like Dr. Messer, who cares about the community,” Jones said. “We had looked at a couple of different options before he offered to donate this property. It’s the perfect location to have the police department because officers can get anywhere they need to go so easily thanks to the new designs we have.”

The new site will has two entrances and exits, one off of Lake Street and the other off of Rachal Drive. It includes multiple offices for staff and BCPD administration, as well as lockers, shower areas, break room, evidence room, armory, garage and covered parking in rear of complex.

Jones said the contract for the project was awarded in November of 2015, but weather prevented start of the project until early this year.

The Bridge City Police Department is also the new location of the municipal court. The complex has its own separate entrances for the police department and for the court, along with a spacious parking lot in front of the complex to accommodate local residents.

“We looked at a bunch of different options, in the beginning, before we decided to move the police department to this location,” said former Mayor and current City Councilman Kirk Roccaforte. “This including moving Ccity hall there, but we, the whole council, felt we did not need a new city hall. The police department was the bigger priority.”

Moving the municipal court to the new police department location was part of the plan all along because it made sense to keep the two entities in close proximity, instead of opposites ends of the city as they are now.

“Moving the court there is a good move,” Roccaforte said. “Besides having both in one location, it will give us more room at City Hall. Security will be a lot better around the new building for the officers and the staff with fencing surrounding most of the property and electric entry gates along the sides of the building.”

The rear of the property is also perfectly suited for a new microwave tower which will be used for 911 purposes and is part of the region-wide $17 million 911 improvement project across much of Southeast Texas.

Both Roccaforte and Jones said the old department building is in a prime location on Texas Avenue and there's a lot of uses someone could make of the building.