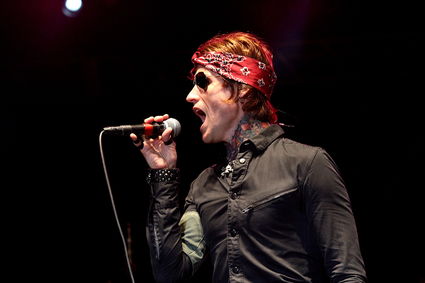 Four bands which helped define a generation of rock music are on the road together this summer and targeting Lake Charles this coming weekend.

The “Gen X Summer Tour” featuring Buckcherry, P.O.D., Lit and Alien Ant Farm rolls into Lake Charles for a concert at 8 p.m., Saturday, Aug. 10, at the Golden Nugget Casino in Lake Charles. This event also brings the venue’s outdoor H2O Pool Concert Series to a close for the summer. Tickets are $15-$50 each for ages 21 and older and can be purchased at www.goldennuggetlc.com.

Buckcherry, which features founding member and vocalist Josh Todd, guitarists, Stevie D. and Kevin Roentgen; bassist, Kelly LeMieux; and drummer, Sean Winchester, is best known for its numerous hit songs “Lit Up,” “Ridin’,” “Crazy Bitch,” “Sorry,” and “Too Drunk…” and others. The band’s last studio album, “Rock ‘n’ Roll,” was released in August 2015, but, in a recent telephone interview with Todd, fans will not have to wait much longer.

Q: It’s been three years since fans have last heard new music from Buckcherry. What’s the status of that and when can fans expect to hear some new songs?

Josh Todd: We’ve got a great new record coming for everyone. We’ve been writing since last November (2017) and we are going into the studio in September to start recording. We hope to have it out in the first quarter of 2019.

Q: It sounds like you and the band really took your time in the writing process for this record. Was that intentional?

JT: We took a long time writing because we wanted to get the best songs that we could. We wrote about 30 songs for this record. That sounds like a lot, but we’ve always written a lot for the other records. Sometimes it was more, sometimes it was less, but you kind of know when you have enough and are done writing. We a strong batch of songs for the next record and that’s why it’s time for the studio.

Q: This sounds like a fun summer tour for fans. It’s definitely one of the better packages on the road this summer. How has it been going so far?

JT: It’s been great. We came up with all of these guys in California and we’ve all toured together at one time or another and been friends for a long time. That just makes it better being on tour together.

Q: In your opinion, what is it that makes this tour so different from the others on the road this summer?

JT: It’s real rock and roll. All of the bands on this tour have a lot of radio hits that fans know and love, and there is a lot of history with the bands. It’s also a great package of bands for a great price and that was important to us. We wanted to make it a great value for the fans because the average concert-goer only attends two shows per year and we want to be one of those shows this year.

Q: Buckcherry has seven studio albums to its credit. With so many albums and dozens of songs to choose from, how in the world do you select a set list?

JT: It’s really hard sometimes, but we have the usual suspects with the hits (laughing). We have songs we have to play like “Lit Up” and “Crazy Bitch,” but you want to have a nice blend in the live show as well from mid-tempo songs, to faster songs and some slow-tempo songs too.

Q: Does the set list remain the same from show-to-show or do you change it on occasion?

JT: I make the set list, so it all comes down to me (laughing). I say that because I know what I’m dealing with vocally each day with my voice. Plus, with the Internet, people want to know information now so there isn’t much element of surprise anymore when a band’s set-list can be found online. It’s not unusual for us to change out five or six songs from one show to the next.

Q: So what’s next for Buckcherry as you head into the last half of 2018?

JT: We’ll keep touring until September and then it’s right into the studio and focusing on the new record. Once we get that out early next year, I’m looking forward to being on the road for the next two years as we support it all over the world.