Start of school just around the corner

Good teachers can make all the difference in the world for a student.

As the first day of school nears later this month, some new teachers are either starting their career or starting with a new district. One veteran teacher spoken to is starting her 16th year of service.

For instance, Nancy Blanchard is not new to the classroom but she will be a brand new fifth-grade science and social studies classroom teacher at Little Cypress Intermediate School. Meanwhile, Jessica Hagler is a graduate and post-graduate from Lamar University and this will be her first year to teach at Mauriceville Elementary School.

Blanchard has been a teacher's aide for 11 years for the Little Cypress-Mauriceville CISD. Prior to that she spent three years as an aide in the West Orange-Cove CISD.

Hagler graduated in exercise science with a specialization in pediatric therapy. However, she also had to do geriatric therapy which wasn't her cup of tea. She then earned an MBA with an emphasis in the medical field, but she discovered that wasn't where her heart was.

Blanchard worked before as an LVN and then a stay-at-home mom.

"Becoming an aide was the best thing I could do with my hours while my kids were in school. I loved it," she said.

Blanchard also discovered it was her calling.

She said she will approach teaching students in a cooperative learning style through interaction and hands-on activities.

"I feel that it is important versus just a lecturing style," Blanchard said. "I want them involved in group projects.

"I had some really amazing teachers (at LCMCISD). But some I didn't take away anything positive from them. I learned what I don't want to do. I saw a bunch of different styles from principals and educators of all kinds."

Hagler said it's important for a learner in kindergarten to be moving, so she teaches content through three ways, three different methods to accommodate different learners.

"I want them to touch it, manipulate it," she said.

Blanchard started setting up her classroom on July 1 while Hagler received the call she was hired at MES while at Disney World. Both said they are excited for school to start.

"I waited a long time for this," Blanchard said after her youngest child graduated college. "My classroom pets and my (classroom) kids are all I have."

Working in the business world made Hagler come home frustrated and questioning her sanity, she joked.

"The downside is wanting money more than love. Happiness stays with you forever. I heard a commercial on the radio about teaching and I knew then to get my teacher's certificate," she said.

Furthermore, Hagler believes her time in the business world has prepared her for the tough times in the teaching profession.

LIkewise, Blanchard has asked that all of the students with disciplinary issues be placed in her classroom.

"I have a background with that," she said. "Everyone deserves a second chance and some are not given that. We need a fresh start everyday. We all deserve that. We sometimes forget these are 9 and 10 years olds."

Hagler, moreover, said she wants to make a difference and care for the world.

"To have a purpose to go to work everyday," she said.

Jessi Farmer has taught for four years in the Nederland ISD and also at Memorial High School in Port Arthur and at West Brook High School in Beaumont. However, this is her first year to teach at Bridge City High School. She'll be teaching English III and IV to juniors and seniors plus coaching girls' basketball and eighth-grade track.

She would like to integrate more technology into the classroom and if she has enough resources, go paperless in the classroom.

She learned about technology by reading blogs and "the possibilities broadened a lot" and "became more of a reality."

Teaching, furthermore, must be in her blood because her mother has taught for 33 years in Nederland.

"I grew up around the classroom," she said.

The Lamar University graduate added she thought she wanted to do something else, but eventually came back to teaching.

She said she likes teaching English because it's personal and individual.

"With math, science or history, you have the right answers. English is subjective. You say and hear different points of views," Farmer said.

In addition to adding technology to the classroom, Farmer has a tentative reading list: "The Great Gatsby" and "Of Mice and Men" for juniors, "1984" for seniors.

"The kids keep me coming back. They're so unique and special. They're a positive in your day," Farmer said. "When I walked into Bridge City High School, there was a vibe I felt as soon as I passed through the doors. I'm excited. I guess fate fell into my lap. It's been great."

Last but not least, Kristi Bertles is a kindergarten teacher at Bridge City Elementary. Her students are also known as Bertles' Bees and outside her door a sign reads, "Welcome to the Bee Hive!"

She said she picked the bee themed classroom because her students are busy little bees.

This is her 16th year of teaching with Bridge City ISD and as a Pre-K teacher at First Baptist Church of Bridge City. She said she's a homegrown product of Bridge City because she has lived there all of her life with the exception of three years in Houston.

"I love teaching. It's a calling. I couldn't do this if I wasn't called," she said. "I love kindergarten. We have a great team and a great community and some really great parents who try to think about the positives."

Kindergarten is the foundation. We start off with numbers, letters, positions and phonics. They also learn social skills such as manners, following directions and sitting.

They also follow a curriculum, have recess, attend physical education class, do social play and learn how to be socially interactive."

Living in Bridge City, Bertles said she often sees former students and their siblings. Their parents have also friended her on Facebook.

On the other hand, BCISD is a growing district. She estimates her school has grown from 180 students per grade level to anywhere from 230 to 250 in a year. Currently, she has 18 students in her class, but she speculates it will grow to 21 to 22 students. 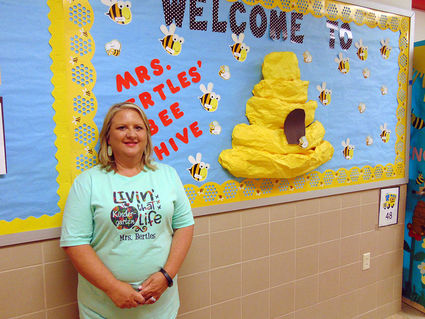 Overall, though, Bertles said she still gets excited about school and she looks forward to returning from summer break.

"In June I zone out as a teacher. I need to decompress. But by mid-July or August I start thinking about school.

She added that she wants her classroom to be homey and comfortable and she wants the parents to feel the same way so they can be at ease.

"It's about fun and learning," Bertles said.