Photo: Orange native Wanda Reinert packs copies of her book, "Orange, Through The Eyes Of The Tigers," for shipping. Four years in the work, the book includes Orange history as told by the 1964 Stark High grad and her classmates. Photos by Iva Switzer.

When she was first tasked with writing a book about growing up in Orange during the 1950s and 1960s, Wanda Reinert was convinced it was a no-go.

But what she didn’t know then was how much help she would receive.

The result is “Orange Through The Eyes of the Tigers,” a 366-page collection of this city’s history featuring 600 photos and the memories of many who lived through it in the Stark High Class of 1964.

“Our class is different from others; we keep in touch. And dozens of my classmates contributed,” Wanda said in an interview last week.

“I tried to take their stories and connect them in a book, so it would be not just a history book but combine history with great stories.

“The best part of the book was I learned so much about Orange. There’s so much in the book I didn’t know about.”

She lived in the Orange County jail from the time she was 8 months old until she was 22, because her father, Chester Holts, was the sheriff.

She was the youngest of three children, 10 years younger than her sister Nova, while brother Morgan was away in the Merchant Marines. She moved with her mom Iva, her dad and Nova into the first floor of the jail in 1947.

Male prisoners stayed on the second floor, while the third floor was for women and juvenile prisoners.

Wanda recalls she had few playmates her own age as a young child, on account of living downtown. Only one girl her age lived nearby. But Wanda had plenty to do.

Reinert recalls the sheriff’s office being much smaller than it is today, with about 150 employees.

“We had five or six cars and about a dozen people working for my dad,” she said. “One man did Vidor, one Bridge City and one served papers.

“But the county wasn’t as big. Back then, the sheriff had to do it all.”

A jail trusty used to take her to movies on Saturday morning and her unique housing arrangement was a hit with teenage friends.

“Ask any of the girls what they remember of me, and they’ll say it was going to the jail for slumber parties in high school,” Reinert said.

It was the guys who goaded her into a book. It all began when she put together a 20-page Xeroxed pamphlet for her 50th class reunion. 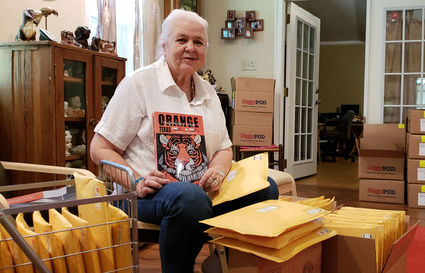 Reinert’s daughter, Iva White Switzer is also due credit, her mom says, and granddaughter Shelby Switzer drew the artwork for the front and back of the book.