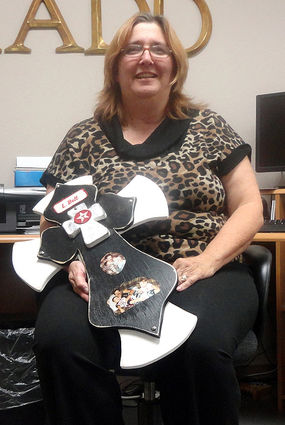 Photo: Kathy Schexnaider, advocate for Mothers Against Drunk Driving, holds a cross made to honor her husband, Lawrence Bell, who was killed by a drunk driver in 1991. Kathy who works tirelessly to help others has suffered a massive stroke and now the family is asking for help with expenses through a gofundme account.

After 28 years of helping an endless list of people, Kathy Schexnaider now needs the help of others.

Schexnaider is a victim specialist with Mothers Against Drunk Driving and was conducting a victim impact panel in Huntsville on June 12 when she suffered a massive stroke. She was flown to a Houston hospital and placed into the Intensive Care Unit where she remained for more than three weeks.

According to her husband, Russell Schexnaider, she had a brain bleed and was not expected to make it through the night or for the much needed surgery of a permanent shunt. However, her strong will and determination has amazed doctors as she fights to recover.

Schexnaider has since transferred to a local rehabilitation center. She will soon transfer again after being accepted into The Institute for Rehabilitation and Research in Houston.

The stroke has heavily impacted her left side. Through therapy she has been working on learning to swallow and talk. She will also have to learn how to transfer to things such as her wheelchair. But, her generous, stubborn, funny, opinionated, and loving personality remains fully intact. She will need all that and more for recovery and rehabilitation, according to her family.

Schexnaider's family has set up a gofundme account to help them with the mounting bills.

They are beginning to understand the extensive therapies, equipment and supports she will likely need to maximize her recovery quickly add up in costs.

Schexnaider became involved with MADD in 1991 when she decided she wasn’t going to just be another victim of a drunk driver and called them the day after her husband was killed.

Lawrence Bell was weed-eating in the front yard of his mother’s house in Fred, with his two children, Thomas, 7, and his 3-year-old brother, Nathan, who were playing nearby. A 62-year-old man, who was known as the “town drunk,” veered off the roadway. He threw Lawrence Bell about 100 feet and slammed his body into a tree. The man later received 6 months in the county jail, 10 years probation and a $1,500 fine for the incident.

Upset and frustrated, Schexnaider called county officials to find out how to keep the man in jail longer, and quickly found out she didn’t have any rights — even in court. In addition, she was told she couldn't speak in court and even if she cried she would immediately be thrown out of the court room.

Silently she sat in the court room and wore sunglasses to hide her tears. Her hopes of addressing the man who has killed her husband were tossed aside by officials.

It was then she decided to stand up for victims’ rights and do something so people who had their lives shattered by drunk drivers would not have to endure the pain she went through. Schexnaider began by volunteering for MADD for nine years before becoming a full-time employee as a senior victim advocate.

Schexnaider rarely stopped for herself as she helped victims in 13 counties by giving up evenings and weekends to help others. Her drive to help others never stopped and when she received a new case she saw it through to ensure the victims has justice. Some of the victim's families became lifelong friends she would always hold close to her heart.

During her career, she has helped the living victims of drunk drivers in getting help with funeral expenses, medical bills and provided emotional support too.

In addition to assisting the many families, she did not lose sight of the first victim which is the deceased. She placed and maintained small white crosses along the highways at the location where the person was killed, if the family did not do it first.

To assist Schexnaider in her recovery, donations can be made at https://www.gofundme.com/kathyshealingfund.