Riding the storm out one year later 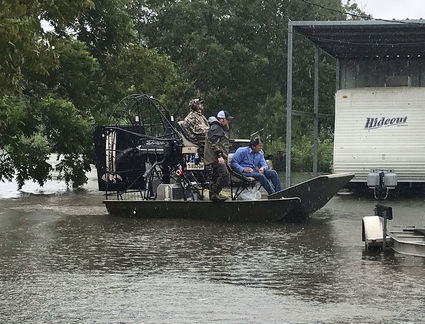 Like many local residents with boats Bryan Chauvin and Andy Hill of Bridge City went into action as water continued to rise. First the duo did volunteer rescue in Pine Island and afterward (seen here) used their airboat to rescue two men trapped on Cow Bayou.

t's hard to believe Hurricane/Tropical Storm Harvey hit a year ago and flooded much of the area. Many in Orange County have recovered are in the process of recovering and look back when the storm came and what they've been doing ever since.

Kira Amy knows what it's like to get floodwater inside her home and to recover.

Amy and her family live in Twin Lakes, a new subdivision on Highway 105 near FM 1442 in Orangefield. They received a couple of feet of water in their home and moved back in February.

"We're thankful to be back in. We were one of the first in the neighborhood to move back in," she said. "My husband was at work that night and I had to get three kids out of the house in the middle of the night."

"Fortunately a gentleman from Deweyville who closed on his house and he was just moving in. He came to us in a canoe. We met some friends from church on 105 and they brought us to their house in Bobcat Trails. Most of Orangefield was hit hard."

Amy thanked God, though, they had flood insurance. It took around two and a half months to get their money back.

"My friends had an extra bedroom and an extra bathroom for all five us to stay the whole time. My kids were sad to leave their friends though," she said.

Like many others in Southeast Texas, the Amy's put up four feet of sheetrock to replace the flood damaged sheetrock, put in new cabinets and remodeled the bathroom. She joked she's now a professional at things like hanging sheetrock and that they've built the same house twice.

Amy said other neighbors are returning to their houses more and more.

"I think when the drainage issues are resolved they will move back. We (Twin Lakes) held water for seven days. It's unlike anywhere else in Orangefield," Amy said.

Orangefield ISD wasn't spared either but it hasn't affected enrollment.

Portable buildings were set up at the elementary school, the junior high and the high school while the permanent structures are being repaired from floodwater intrusion.

"We'll have portable buildings until everything is completed," said Stephen Patterson, OISD superintendent. "Enrollment is up. Every day we're adding students. We've added 65 kids last week. We'll be ready for the additional students. We have great teachers and great test scores."

The district will have an accurate enrollment count by the 15th day of the new school year.

Jerry Jones, city manager for Bridge City, said compared to Hurricane Ike in 2008, the devastation was much less for the city from Harvey in 2017. For example, 800 houses flooded during Harvey while all but 16 houses were spared from the storm surge from Ike.

Nevertheless, there was some damage from Harvey, particularly to the city's infrastructure.

"We did everything we could possibly do. Our guys (city crews) were monitoring infrastructure. Fortunately we had places we could go to because some areas didn't flood," Jones said. "It's like any natural disaster, groups were taking action getting people out and we were putting barricades on streets. We had supplies."

The city has applied for numerous grants and funding for Harvey. For instance, the city can be reimbursed for emergency response crews who set up in Bridge City.

Moreover, some of the city's infrastructure, such as the lift stations, were placed under the Texas Municipal League's insurance coverage.

Any funding received will be used to repair roads, clean out ditches, etc. Money from the South East Texas Regional Planning Commission can be used for buyouts and infrastructure projects. Emergency funding can be used for cleaning out outfall ditches and roadside ditches.

"We'll wait for the money to process," Jones said. "The (Orange County) Drainage District is helping clear the outfall ditches. It's like Ike, it takes from a year to a year and a half for the money to come in. However, the Regional Planning Commission should soon be disbursing."

Department heads with the city of Pinehurst each said it was a team effort in their response to Harvey. City Administrator Robbie Hood said the city has come a long way and they're moving forward.

For instance, Darren May, with the streets department, said at least three-quarters of the city's streets were under water. Flooding from Adams Bayou contributed heavily to the flooding.

After Harvey landed, first responders and city staff rescued hundreds of people during those first days.

"We worked as one unit, Our motto was 'Whatever It Takes.' The best in our city employees came out with their care and concern," Hood said. "These people's (residents) lives were out on their front yards. It was heart breaking. This was the first step of the healing process."

Now, Hood said the city is seeking funding to repair streets from the Texas Department of Emergency Management and $7 million has already been allocated from the Texas General Land Office with Community Development Block Grants for infrastructure improvements to be distributed by the SETRPC.

Harry Vine, code enforcement officer, said 400 structures in the city had water in them. That has generated around 450 building permits for last year. A normal year will have around 125 permits issued.

"In the process I've met some really fine people in the city," he said."They've suffered physical and emotional damage. Most just wanted someone to talk to or for me to give them a hug. We are also careful in helping them select contractors. There's not a lot of qualified of them in this area and they were overwhelmed anyway."

Vine surmised half of the homeowners in Pinehurst suffered significant damage and trying to get back to normal, one-quarter of them are in between — they're back in their homes, but everything is not yet fixed and 20 percent of houses has changed hands with investors buying homes to either flip or lease.

Furthermore, Vine said outside people have inquired about properties.

"The interest is there and it's changing hands," he said.

Justin Trahan, with the city's wastewater service, said Pinehurst was one of the first cities to clean up because the public works department worked around the clock. Additionally, the city never lost potable water, sewer service and those departments never lost electricity thanks to backup generators and employees manning the stations.

May he didn't get to go home for three days after Harvey hit.

"Our employees worked hours and hours without sleep," Hood said.

Trahan added that one of the wastewater service's earliest rescues was on 30th Street. When they picked up the residents, they didn't know where to bring the people. Eventually, places such as Family Worship Center on 41st Street housed residents and fed them. They rescued 130 residents on their own.

Hood said, however, during rescues staff identified a gap in their emergency response capabilities. For instance, the city's grappler truck was used to make rescues and they almost lost the truck in the process. They also used their aluminum boat with no motor to make rescues.

Since then, thanks to a military program, the city was able to secure some military vehicles including a four wheel drive Humvee. The city only spent $2,600 in shipping cost to acquire the vehicles. The fire department also acquired a rescue boat donated by Texas game wardens.

Dawanna Kibodeaux, a dispatcher with the Pinehurst Police Department, said Harvey was a nightmare.

"They woke me up at 3:30 in the morning because water was coming into the building," she said. "They started transferring calls from Bridge City to us. We also got calls looking for the Orange Police Department. I know one of the dispatchers for OPD and I started texting calls to her (because Kibodeaux was overwhelmed with calls). I would take a picture and send it to her."

Kibodeaux estimated they received more than 2,000 calls in the early days of Harvey. She worked until 10:30 p.m. that first day.

She added that she has been a dispatcher since 1986 and that was the most calls she ever received by far. Many residents couldn't get help that first day because the floodwater was so high.

The following day a list was compiled with names so police could check up on them. Calls were prioritized who to go to first.

Officer Jocelyn Trussell said she was surprised there wasn't more tragedies in the city, such as fatalities. She called that a success.

"We all worked so well together. We were all helping everyone," Kibodeaux said.

City Secretary Debbie Cormier and a friend of her's also lent a hand, writing out calls and giving them to Kibodeaux so she wouldn't have to put people on hold.

Hood estimated Pinehurst suffered a temporary loss of population, but the people will come back and the city will be stronger and better than before.