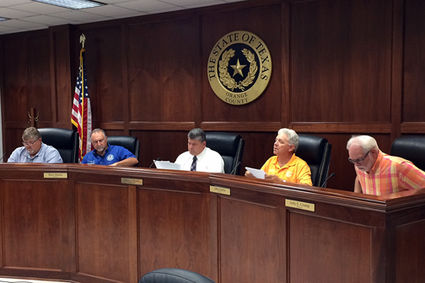 Orange County leaders are opting to use a chunk of their Rainy Day Fund to help taxpayers.

At Tuesday’s County Commissioners’ meeting in downtown Orange, the vote was 5-0 to keep the tax rate at 54.2 cents per $100 valuation.

That means the county’s portion of the ad valorem tax bill for the owner of a home with an after-exemption value of $100,000 would be $542, the same as last year.

“I like my neighbors,” County Judge Dean Crooks said. “I don’t want them to move or give them a reason to move.”

“Lord knows it was a rainy day,” Crooks said, referring to last August’s Tropical Storm Harvey that dumped more than 60 inches of rain in five days.

Harvey’s flood waters sloshed into more than 60 percent of Orange County homes and many were total losses.

Because of the resultant lowered property values, Orange County needed to charge 60.4 cents/$100 to bring in the same amount of tax dollars as last year.

By choosing not to raise the rate, commissioners are looking at an unbalanced 2019 budget, which Auditor Pennee Schmitt said is “more like $5 [million]” in the red.

The county’s proposed budget, released earlier this month, was based on a tax rate of 54.2 cents/$100 and showed $46 million in spending, against $43 million in revenues.

“I do have an issue,” Burton said, “in that we’re supposed to adopt a balanced budget, in that we spend what we take in.

“The Rainy Day Fund is for emergencies, not operating expenses, and I get that. But sometimes unique situations call for unique answers.

“We are fortunate that the last few years we stocked some money back and we’re able to do this.”

The county actually deposited all its Rainy Day Fund into the 2018 budget as last-minute “contingency funds” added because of the uncertainty of Harvey expenses.

Estimates are that the county has spent more than $15 million on reimbursable Harvey cleanup and mitigation. So far, the county has only been reimbursed about $10 million.

Commissioners’ court has until the end of September to arrive at a final 2019 budget and tax rate but had to vote a proposed number Tuesday so it could meet a posting requirement before two public hearings on the tax rate, set for 6 p.m. Tuesday, Sept. 11; and 9 a.m. Friday, Sept. 14, both at the County Administration Building, 123 S. 6th St.

Commissioners are eyeing budget cuts and might end up lowering the tax rate. But they are not allowed to raise it after Tuesday’svote.

That’s why Gothia initially asked the other four court members to consider setting it a little higher.

“I’m comfortable staying the same, but I’d like to see what the public comments are,” he said. “It concerns me a little bit that we aren’t giving ourselves a little wiggle room.”

Crooks was the one who first proposed the .542 tax rate Tuesday.

“I think we can still make our budget happen,” he said.

And delaying big-ticket purchases will be important.

“We have talked to our department heads about the capital outlay projects that we’re looking at, about keeping those on track as our FEMA funds come in.

“Rather than banking on those FEMA reimbursements coming in and assuming the best, we’ll assume the worst and move forward once they come in and the money’s actually in our treasurer’s hands.

“Then maybe we can look into procuring some of those capital outlays.”

The county paid $324,982 in bills, accepted a $5,000 grant from the Foundation for Southeast Texas, and awarded a contract for aviation fuel for Orange County Airport.