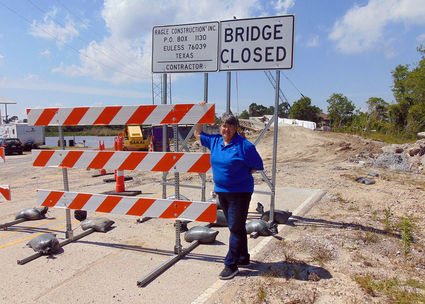 Peggy Albair, owner of Peggy's Place on East Roundbunch Road in Orange thought the swing bridge construction project in front of her business would be completed by the end of this year. She discovered this week, however, it will not be completed until next year.

For one Orange business, it's more of hurry up and wait.

Peggy Albair, owner of Peggy's Place on East Roundbunch Road, said she originally thought construction on the swing bridge on Cow Bayou would be completed and reopened by the end of this month or in November at the latest. She was informed by work crews, however, it may be next year before the project is completed. Part of the delay is they need a machine part custom made.

"They need a part that makes it swing out that's the issue. They said they were going back to Houston. We haven't seen anyone working there. They're putting a hurt on us," Albair said.

Clark Slacum, county engineer for Orange County, said he spoke with Texas Department of Transportation personnel who told him they anticipate the bridge to be completed in either January or February of 2019.

Likewise, Sarah Dupre, public information officer with TxDOT, said they are waiting on repairs to the swing span to be completed. She said in May the $11.4 million bridge project was 60 percent completed.

Over time, Albair, closed the full service portion of the restaurant and reopened in April in a revamped format, according to a prior The Record article. The eatery is now take out orders and/or delivery only.

They’re also moving in an entirely different direction by housing a game room with video games and traditional board games for kids and adults at their location at 2682 East Roundbunch Road in Orange. Sunday's family game special is four hours in the retro game room with four burgers, chips and drinks for $50.

LIquid Picasso classes are each Monday evening for $30 with all supplies included. Albair said additional nights may be added along with a weekend session for kids to paint.

Albair said her business was impacted when crews shut down the bridge in March 2017.

“Our sales dropped,” she said. “Some people didn’t want to have to come around (from Bridge City to FM 1008, down East Roundbunch Road) or they didn’t know how to come around. Some people have a limited time for lunch to come out of the way. We knew it would be coming, but we didn’t know when. If we did, I could had put signs out and posted on Facebook.

“Summertime is our best time and our sales dropped. I went to see if I could be reimbursed (by Orange County), but they can’t do that.”