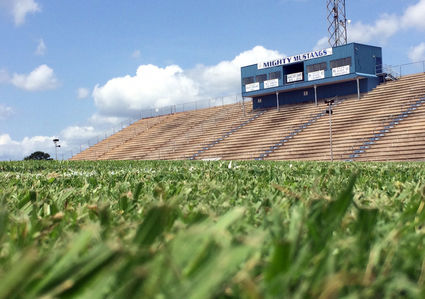 West Orange-Cove taxpayers will have eight items to vote for or against in the Nov. 6 bond election for $25.75 in facility updates.

One will be updated technology.

“The technology, gosh, technology is changing all the time and we’ve got to be able to keep up with it,” school board president Ruth Hancock said.

Another will be artificial turf for football, baseball and softball fields.

“Technology and turf, that’s what it’s all about,” Athletic Director Cornel Thompson said. “Why shouldn’t our kids have the same kind of playing fields that kids all over the state have?”

According to Hancock, voters can vote for each of eight bonds separately.

They are identified in the frequently asked questions on the WOC website as:

- HVAC, roofs and other infrastructure repair or replacement

- New Transportation Center on higher ground and with protection for vehicles

- Athletic facility improvements (Athletic), including artificial turf for boys’ and girls’ activities at the High School

Approval of the total bond package will add less than 8 cents per $100 value to a homeowner’s tax bill, Hancock says.

The district’s website FAQs explain that after taking the state $25,000 homestead exemption and the WO-C local 20 percent exemption, the owner of a $50,000 home would have to pay only a dollar a month, or $12.05 a year more.

“I know the people who can least afford it are the ones that live in a house worth $50,000 or less,” Hancock said, “but I think everybody should be willing to spend a dollar a month.”

“The bond election was just presented to [trustees] in the last couple of weeks but we have been talking about the bond issue and talking about our needs for several years.”

A Citizen’s Advisory Committee toured all the district buildings and put together the needs list and a telephone and Internet survey of district voters returned favorable ratings on those items.

“I think it’s really just catching up, more than anything else,” Hancock said. “There has not been a bond issue in several years. We’re just ready to do it.”

The district’s website is www.woccisd.net and the FAQs can be reached by a link halfway down the home page.

Questions about the bond issue can be sent via email to [email protected] . A response will be sent as soon as practical.

To vote in the election, you must reside inside the school district boundary and be a registered voter. The deadline to register with the County Elections Administrator is Oct 9. Remember to bring a picture ID and your voter registration card to vote.

Voting on Election Day Nov. 6 will be conducted at polling places and times that will be released from the County Elections Administrator.