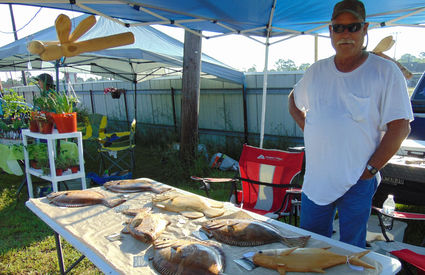 The Bridge City Farmer's Market is taking a break until mid September so vendors can switch over to their fall produce to sell. There may also be some new crafts people when they set up from 7 to 11 a.m. on Saturdays behind the Bridge City Community Center and the Bridge City Public Library. Here, Robert Vail show wood carvings of fish he made.

For those wondering why the Bridge City Farmer's Market went away, there's some good news.

Betty Vail, organizer for the market, said people in town have been asking her when it will reopen. The market is taking a break from August 4 to mid September. After that, it will close sometime in November until reopening in the spring. They'll set up from 7 to 11 a.m. on Saturdays at 101 Parkside Drive behind the Bridge City Community Center and the Bridge City Public Library.

"Our produce people need to get their fall crops done. They were running out of produce. Besides, it's so hot," Vail said.

She added that some of the produce vendors didn't set up in July because they were running low on product.

Hurricane/Tropical Storm Harvey shut down the farmer's market last year until it reopened in May of this year.

When they reopen in September, there also may be some new faces on the crowd.

Some of the new crafts will be door hangers and door wreaths, and homemade key chains.

Vendors will be selling various fruits and vegetables and other foods along with crafts such as Vail’s husband, Robert, also brings his creations made from his wood shop.

Everything is handmade. The profits go to the vendors, she said.

Vail added that vendors and shoppers come from all over the area.

Founder Marion Pepper, who has her own little farm of chickens and grows various vegetables, was asked by her friends if she sold any of her items, according to a prior Record article. This gave her the idea to go on social media and ask the community if they would like to purchase goods from local people. The response was overwhelming with over 2,000 likes and comments on Facebook. Soon afterward, Pepper went to the city council and gained their approval. From there she had meetings with possible vendors and the Bridge City Farmers Market was born.