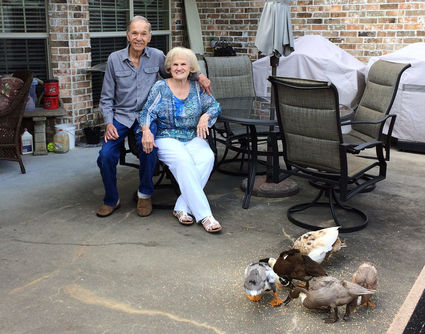 with his wife, former Justice of the Peace Flo Edgerly.

Good news for organized labor in Texas came with a big uptick in union workers employed in 2017.

“Unions are on their way up in this area,” said Todd Longron of Orangefield, business agent for Pipefitters Local 211.

Before the early start dates for public schools, the first Monday in September -- Labor Day – used to be celebrated by families as the end of summer.

But the holiday began in the late 1800s to honor the American labor movement and the contributions that workers have made to the well-being of the U.S.

“The pendulum is coming back,” she said. “I definitely think the unions are coming back. Look around, look at all the growth, look at the plants expanding.”

She and her husband, Gene Edgerly, are retired in north Orange now after more than a century of combined work in organized labor and political service.

“The first AFL-CIO convention Gene and I went to was in 1958 in Corpus Christi,” Flo recalled. “We marched with garbage workers, who were on strike.”

In a working career spent at Jefferson Chemical, Gene got active with the International Association of Machinists, eventually serving as president.

He represented union workers in contract negotiations for 20 years. Gene was vice president of the state AFL-CIO.

He and Flo were the only husband-wife team to serve on the labor-management board at the John Gray Institute.

Flo was JP of Precinct 3 for 21 years. Gene served as liaison between the labor and private sectors for Texas Workforce Council.

“Labor was strong in the 50s and 60s,” Gene Edgerly recalled. “In the 70s, union members had a job for life. It’s not like that anymore.”

By percentage, Texas ranks among the bottom 20 percent of states for union membership among its employed. But by numbers alone, it ranks in the top 20 percent.

The U.S. Bureau of Labor Statistics shows Texas had 543,000 union workers in 2017, which represents 4.7 percent of all Texans employed.

“I can remember a day when we had 4,700 local members and had 3,000 travelers at our peak,” said Longron, who saw the Triangle’s Pipefitters Local 195 merged into the Houston-based Local 211. The Beaumont office is one of a handful of Houston satellites for the Pipefitters.

“At one time, we probably had 85 percent of the market share in the area,” Longron said. “Now, we probably carry 8 to 10 percent. Our local’s down to about 730 members in the Beaumont area.

“Labor unions were the forefront of the middle class,” he said in a newspaper interview. “And in the 50s, 60s and 70s economy, it was easy for big companies to give into labor demands. The companies made money and they didn’t mind giving it.”

But Edgerly says that changed. Non-union contractors broke in to what had been “closed shops.”

“We thought we were untouchable,” Edgerly said in a 1997 interview.

In 1981, President Ronald Reagan fired 11,000 members of the Professional Air Traffic Controllers Organization who walked off their job in what Reagan said was “an illegal strike.”

The bargaining power of American workers was never the same.

“Whenever a union man across the whole United States didn’t walk out and protest that, that was a mistake, that was the start,” Longron said.

“When every union man didn’t hold up and back that guy, we messed up.”

But like Flo Edgerly, Longron thinks union workers will continue to grow in demand.

“As a lot of contractors around here went non-union and we slowly lost a lot of pipe work, we in our union converted to instrumentation,” he said. “In Houston, pipefitters picked up the HVAC side.

“Right now, the industry is suffering for qualified people.”

Flo Edgerly points to the apprentice programs being run by the Pipefitters, Sheet Metal Workers, IBEW and Plumbers locals.

“Building trades are booming,” she said.