County’s Drainage Hotline up and running 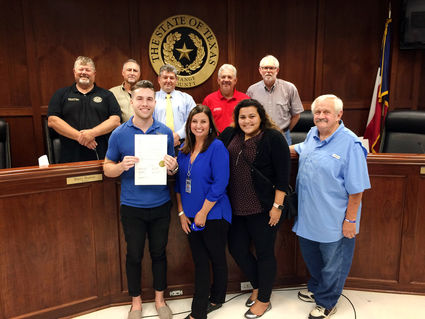 The best news at Tuesday’s meeting of Orange County Commissioners was that all the attention to improving drainage the past few months seems to be working.

But if this week’s “rain event” of between 6 and 11 inches didn’t drain where you are, the county has a new response.

It is intended to help property owners unsure of which of the various entities – cities, the county, or drainage districts – to call with their drainage problems.

If Orange County citizens know which agency is responsible for stormwater drainage on their property, they are asked to call that agency.

“This is for citizens who are unsure of which entity to call.”

So far, only the county and the Orange County Drainage District are coordinating the effort, but Crooks says he is hopeful cities in the county will sign on as well.

Problems reported to the Drainage Hotline will be passed on to the proper jurisdictions, Crooks said at an August press conference that also included Don Carona, general manager of the OC Drainage District, and Clark Slacum, county engineer.

Slacum and Lisa Reeves, county MIS director, worked together to get the perfect voice-to-text software so voice mails left on the Drainage Hotline will generate an email at any time of any day. The emails will be routed to the proper agency. The calls will also establish a database that can be used to monitor progress and problem-solving.

“Water doesn’t know if it’s in the city or the county system,” Slacum said.

“But it knows gravity,” Carona said.

“I cannot stress enough that this isn’t trying to take anything away from cities or TxDOT,” Crooks said. “If people know the number [for the correct entity], call it.

“But this is here to help when you don’t know.”

Commissioner John Gothia noted Tuesday that ditch-clearing operations by the county, the Drainage District and cities was paying off.

“I was out driving around Sunday and Monday and what we saw was much improved. Actually,” Gothia said, “the water went down a lot faster and did not get as high as before.”

One other flood-related tidbit noted at the meeting is that the new automated sandbag-filling machines bought for the county with donated grant money will not work with wet sand.

Commissioners directed Slacum to explore the possibility of building pole barns or other storage options at the precinct barns.

She said that the new electronic voting machines that the county recently purchased would not be ready to go for November’s election. Barrow said there was a mismatch with other election software already in use that could not be solved in time.

Items fill 60 pallets and range from mitre saws to Gradall excavators, with more than 40 computers and more than 40 vehicles on the list.

A detailed list of items will be available with instructions for registration are available at www.renebates.com. Bidders must register to participate in the auction. They can contact the county purchasing agents at 409-882-7901, 7902, 7903 and 7904, or view the items at one of eight county offices, with the online list of items including a location for each pallet.

She said USDA Rural Development would have a representative at the Expo Center from 3 p.m. to 7 p.m. Monday, Sept. 10 with low interest loans (1 percent to 3.75 percent interest, depending on household income) to purchase mobile homes, water wells or septic tanks.

She also said Samaritan’s Purse, a Christian relief organization based in North Carolina, has a program that might provide replacement mobile homes for Orange County mobile home dwellers who lost those homes in the storm.

Tubbleville said Orange County Disaster Relief is selling T-shirts for $20, with proceeds going to help those Harvey victims with unmet needs. The shirts are gray with blue and orange print.

Church groups and other volunteers are still being sought to help with rebuilding homes after the year-ago tropical storm that dumped up to 60 inches of rain on Southeast Texas in less than a week.

Tubbleville reminded citizens with unmet needs to call 2-1-1 to connect with a case manager that can guide them in rebuilding their homes and lives.

Diane Gremillion, commissioners’ court legal counsel, said she had yet to track down someone to tell her if the Austin company had a required performance bond in effect.

Commissioners agreed to renew a $5,000 a month contract with Gordon and Parker, LLP to provide health and medical services to inmates at the County Jail. They OK’d five departmental line-item transfers.