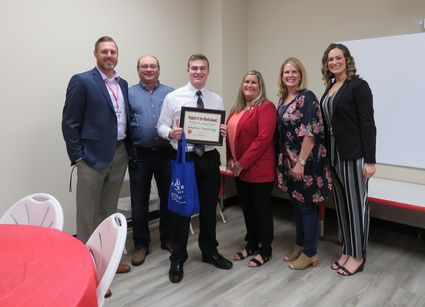 Bridge City, Texas, September 11, 2018 – The Bridge City Chamber of Commerce is pleased to announce that the September Student of the Month for Orangefield High School is Jonathan Armstrong.

Jonathan was presented his certificate and gift bag by Bridge City Chamber Ambassador Christy Khoury, Orange County Treasurer, at the September coffee hosted by the Friends of the Bridge City Public Library.

Jonathan is the son Brad and Cheryl Armstrong. He has a GPA of 4.62 and is ranked 11 of 116. Jonathan’s awards and honors include:

Jonathan’s clubs and organizations include:

Jonathan assisted with cleanup after Harvey, gutting and repairing homes in the area.

Bridget Trawhon, Professional Communications Teacher, said, “Jonathan Armstrong has a bright future before him. He is a true Aggie fan and bleeds maroon. His communication skills are superb and I wish him the best of luck in his future. Gig' em, Johnny!”

Simone Oregel, Math Teacher, said, “Jonathan was a great student to have in Honors PreCal. I wish he would have taken AP Calculus this year.”

Jonathan plans on attending Texas A&M in the Fall of 2019 and major in Sports Management. He will work towards an internship with TexAgs.com while striving towards his dream job of a career in Major League Baseball or NCAA football, and hopefully become a general manager or football analyst for Fightin’ Texas Aggie Football!

Jonathan also said that in the next 4-5 years he plans on being involved in Breakaway, a Christian ministry at Texas A&M. It is the largest weekly student gathering in the country. He plans to spend his summers at PineCove Christian camp as a counselor, where he will serve many children and families.