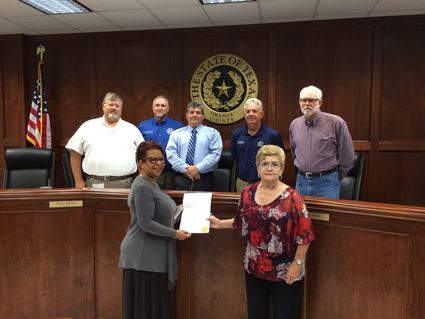 Orange County Judge Dean Crooks knew the job was dangerous when he took it but he went down swinging on the losing end of another 4-1 vote Tuesday.

Crooks proposed cutting the salary of the five members of commissioners’ court – he and the four commissioners – to 5 percent above what the officials earned before a large increase in 2018.

He said to cut the top officials’ pay would show the county’s 370 employees they were “leading from the front.

“I would ask that the court consider reducing our pay and come up with a percentage that’s probably more in line with the [5 percent] raise that was made last year,” Crooks said.

The commissioners, including two lame ducks that wouldn’t be affected by the changes, saw it differently.

“Last year, we looked at that and reviewed it over several months,” Precinct 3 Commissioner John Gothia said.

“The county employees’ raise was 5 percent. But those employees over a 10-year time had gotten raises to accumulate more than 15 percent while elected officials had gotten no raises over that time.”

Even Precinct 4 Commissioner Jody Crump, the only one to vote against last year’s elected officials’ pay raise that averaged about $11,000 for the 18 elected officials whose salary comes solely from the county.

“I opposed it before,” Crump said. “Everybody knows it. I was the bad guy. I declined the pay increase. But the way this agenda item is written, I support the elected officials’ salaries.”

The agenda item called for “possible action regarding adopting the Elected Officials salaries” for the 2019 budget.

The county had recently advertised the elected officials’ pay at the same rates as those approved last summer in what turned out to be a controversial vote held during the national emergency that was Tropical Storm Harvey.

Last year’s raise was the first for elected officials in nine years, and it didn’t raise many eyebrows before the storm.

But their offices didn’t get the biggest raises. Tax assessor-collector Karen Fisher saw her base salary jump from $63,118 to $78,000, a 24.1 jump. County treasurer Christy Khoury’s salary jumped 24 percent and district clerk Brandy Robertson saw her base pay rise 23.7 percent.

The judge’s salary was set so high so it would be more than the $104,000 earned by Sheriff Keith Merritt whose salary was upped to be more than his chief deputy, whose pay is subject to the deputies’ collective bargaining agreement.

Neither of the outgoing commissioners, Barry Burton and Crump, accepted the 2018 pay increase, and neither did then-County Judge Stephen Brint Carlton.

They said they would only take the raises if they won re-election this year. All three lost in the March Republican primary.

Crooks announced when he took over for Carlton in May that he, too, would not accept the raise.

Commissioners John Gothia and Johnny Trahan, who were then finishing up their first year on commissioners’ court, took their raises from $63,118 to $72,800.

Crooks said he had been accused of “grandstanding” for taking minority positions the last couple of weeks but said he was merely being faithful to those who elected him by doing what he could to make good on issues he raised during his campaign against Carlton.

Commissioners took no action on approving a 2019 budget, pending answers to questions about restricted funds. And without an agreed-upon budget, they were prohibited from setting a final tax rate.

Both should happen next week.

The new county judge made it clear that cash flow could become a real issue for Orange County at the start of the new fiscal year in October.

That’s because of questions over the use of restricted funds and the fact that tax income is typically slow until the 2018 taxes come due January 1.

He said the county may have to obtain a line of credit. He noted that two federal and state reimbursement checks for Harvey repairs should be in the pipeline but added “I’ve learned not to count on it until the dollars are in the bank.

In other business Tuesday, the county accepted $435,000 from the state for July sales tax, heard Fisher say the county had banked nearly $200,000 from August tax collections and okayed the paying of checks totaling $439,000 by the county.