Down Life's Highway - The Fisherman Remembered

Richard passed away Sunday evening, Sept. 22. I first met him around 1954, when we were both youngsters. He worked at KOLE Radio in Port Arthur with Gordon Baxter and Les Ledet. Les and Bax were negotiating to buy the station. At the time, Richard went by the name of “Dick” Corder. Best I recall attended Port Arthur College. Bax and Les bounced around between KOLE and KPAC, a station owned by Dr. Sam Monroe’s parents, and where Ed Lovelace worked.

In the mid-50s, Ed, along with some Jewish friends, bought KOGT in Orange. Ed brought “Dick” to Orange to work at the station and in sales. Ed, of course, was the best promoter of all. He took that little AM station and some good talent and put the station on the map. In 1957, Bax got fired at KPAC and Ed brought him to Orange. Bax did the morning show from 6 a.m. to 9 a.m. He broadcasted live from the Holly Motor Co. showroom, a Chrysler, Dodge, Plymouth dealership where I was sales manager and Ted Wilkinson was general manager. It was located where a car wash is now.

Bax had a large following of advertisers and listeners but residents in south Jefferson County couldn’t catch the station. This caused problems. Bax left and went to Beaumont. For years the radio station was at 407-Tenth Street, then moved to an upstairs building downtown. Ed then built a station and a home for his brother next door at the present location..

After that Lovelace moved Richard into the early morning slot. Richard sold his own show. It became so popular that Ed sold spots on it also. Their only problem was Ed didn’t pay commission on those extra spots. Over the years however, Ed took care of Richard and he became the morning voice in the greater Orange area. The engineer at KOGT was Ed’s right hand man, Rev. Bob Simmons, who even followed Ed to his Beeville radio stations.

Around 1965 Richard pioneered the broadcasting of Orange County High School football games. He followed Bridge City in their championship run in 1965 and in 1966; he broadcast their state championship game from Waco. At first he worked games alone then was joined by others. Joe Kazmar worked the broadcast with Richard for several years.

For years Richard wrote a “Let’s Go Fishing” column each week for our newspaper, the Opportunity Valley News. He spoke about the Bass clubs and individual fishermen and his fishing buddies. Among some still around are Troy Woodall and Judge Carl Thibodeaux.

When Lovelace sold the radio station to former governor Allen Shivers and his group, they brought in a guy named Bill Forte to run the station. His first move was to change Richard from morning to drive time, and then fire him. 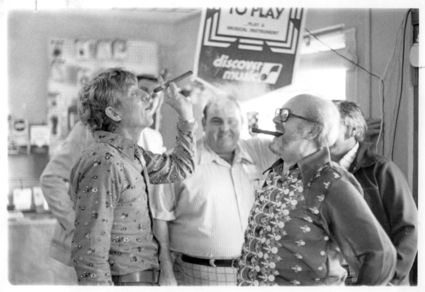 I contacted my friend Dewey “Teddy Bear” Cox and other business leaders to see if we could help save Richard’s job which he had been on 45 years. “Teddy Bear,” a tough union business agent and negotiator, had me call Forte to come down to our OVN office. Cox started off real smooth, and then Forte, a nice enough guy, said the wrong thing and Cox dropped the hammer on him. I though he would never let up. I got to feeling sorry for Bill but before he left he had made a deal. Richard was back on the air the next day and soon on morning drive time. He was still on mornings when Stelly bought the station.

In 2006 Richard suffered a stroke. He tried to come back but it just didn’t work. He had been in poor health since. He was at home when he passed away. Richard and I traveled a long way together. Of all the folks I’ve known, he was one of a kind. I call them special people I’ve met Down Life’s highway.