BC Chamber gets a jump on the holiday season 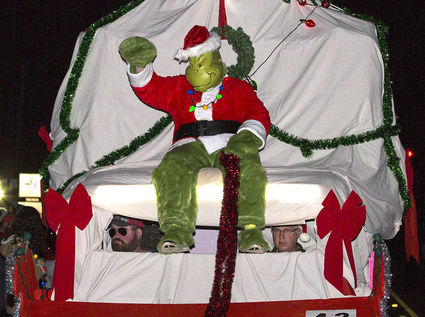 This year's theme for the 2018 Christmas Light Parade at 6 p.m. on Saturday, December 8 that starts at First Baptist Church of Bridge City and that runs to the Bridge City Intermediate School is called One Starry Night. The Bridge City Chamber of Commerce is taking applications online at www.bridgecitychamber.com, or they can be picked up at the Chamber office at 150 W. Roundbunch Rd.

It may not look a lot like Christmas with all of the heat, and humidity and mosquitoes, but it will be here before you know it.

The Bridge City Chamber of Commerce, likewise, is being proactive as they are now accepting applications for the 10th annual Christmas Light Parade scheduled to start at 6 p.m. on Saturday, December 8 at the First Baptist Church of Bridge City on West Roundbunch Road and end at Bridge City Intermediate School. This year's theme will be One Starry Night. The mayor's trophy and a $200 prize will be awarded for best themed entry. Decorating in theme is not required to participate. B.J. Hanneman, director of the Bridge City Chamber of Commerce, said any type of vehicle will be taken in for the parade.

Furthermore, Bridge City Bank will be showing "The Grinch" on the lawn behind the bank immediately after the parade.

"We had so many entries last year, the parade lasted an hour and a half," Hanneman said. "Jeepers for Jesus had 30 vehicles. We also had the Golden Triangle Trikers. Every person on the float donates a toy. We collect toys at the Chamber (150 West Roundbunch Rd.). The night of the parade Granger's (Chevrolet) and Energy Country (Ford) bring trucks people can drop off toys in or call us to pick up the toys from people not in the parade. Last year, 600 kids got toys through the Ministerial Alliance. This year should be great too."

Bridge City Councilwoman Terri Gauthier, owner of Total Impressions Salon, will host the LIght of the World program at Bridge City High School on December 7. Dance companies, the Cardinal Singers, the BCHS theater group and Tiger Rock Martial Arts will be performing. Hanneman said the program will have an inspirational ending and the $5 entry fee will go to the Ministerial Alliance.

Applications are available online at http://www.briditychamber.com or at the Chamber office. For more information call 409-735-5671.