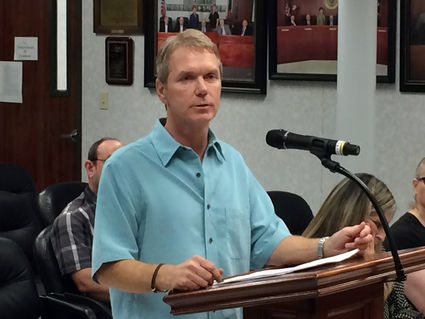 Orange County commissioners adopted Tuesday a 2019 budget that projects a $3 million deficit while keeping the tax rate same as last year, 54.2 cents per $100 in property values.

Those decisions came after a 90-minute discussion between commissioners and the county attorney, auditor and treasurer that was capped by a 3-2 vote for the budget which predicts $49.4 million in spending against $46.4 million in revenues.

The five men all agreed on the tax rate.

Crooks and Gothia voiced thanks and satisfaction with budget cutting by county department heads and other elected county officials who were working with $3.3 million less in tax revenues this year.

The first budget proposal in August had about twice as large a deficit as the final one.

“From what we were first looking at when we started the budgetary process four months ago and we thought our deficit was going to be in the $6 million range, we’ve got to be happy with where we are,” Gothia said.

“Because it looked a lot worse.”

Crooks noted that last year’s budget passed for $69.7 million and this year’s for $20 million less.

“It’s not the way I’d like it to be, but that’s the best we could do to make it affordable, and we did it all without raising taxes,” he crowed.

The 2017 budget passed with $55.3 million in anticipated expenses and the 2018 budget of $69.7 million included an infusion of about $12 million – the “Rainy Day” reserve fund – thrown in at the last minute to deal with Harvey expenses for 2018.

Last-minute trimming by Crooks and Company this year included refusing to add new workers requested by a number of departments and the withholding of spending for large capital expenses, such as cars for the Sheriff’s Office.

Crooks said those purchases could be revisited if FEMA delivers some of the $5.7 million in reimbursements still outstanding for the county.

Burton took exception with the budget numbers. He said he prepared his own audit, removing payroll and insurance from his figuring for the 52 county departments covered in the general fund.

“Looking at actual expenses, those 52 departments spent $30.9 million in 2018 and the operating budget is a combined for $38.7 million for the same departments in this budget.”

Crooks argued that past-year budgets, not actual prior year expenses, should be used as a basis for future budgets while Burton disagreed. He noted the county actually spent only $53.4 million in 2018, the fiscal year that ends Sunday.

“Let’s set the budget based on what we spent, not on ‘maybe’ numbers from last year,” Burton said. “This is not, in my mind, a conservative budget.”

“We have to budget for unexpected costs,” Crooks said.

The county judge also noted none of the commissioners attended the final public budget hearing Sept. 17.

“If he had cuts he wanted to make, he had time to make them,” Crooks said of Burton.

Believe it or not, most of the 90 minutes before Tuesday’s budget vote were spent dealing with how to deal with restricted funds. Crooks says he discovered recently that monies given the county in grants for specific purposes were mingled with unrestricted funds.

That could – or probably has – led to using restricted funds for improper purposes, if only for a short term.

The discussion in front of the commissioners’ court audience, which also included County Treasurer Christy Khoury, was about the best way to separate those funds.

No action was taken on that – a later workshop was suggested.

“We’ve had this discussion with other [county] judges and with all three auditors,” Crump, an eighth-year commissioner, said.

“It just never gets done.”

Passed as an add-on to the budget approval vote was a mandate for Khoury to find out the cost of an $8 million line of credit.

Crooks brought up a week ago the likeliness of a cash flow crisis in the first three years of the 2019 fiscal year, October through December.

Property tax revenues generally don’t start coming in until January and the judge calculates the county could be paying up to $12 million in bills in those three months with only $5 million currently in unrestricted reserve funds.

Joel Ardoin, the county’s emergency management coordinator, reported later in the meeting that $5.7 million in FEMA reimbursements were pending and nearly half that amount could arrive within weeks.

Speaking of banking, the county paid $494,000 in bills this week and commissioners okayed an end-of-the-year shuffling of $5.7 million in line item transfers inside departments’ 2018 budgets.

Patrick Beebe, the county’s mosquito control director, said his department is flying its plane seven days a week and running seven fog-spraying trucks per day, when it’s not raining.

He noted it had rained on 21 of September’s 25 days so far. But his troops had sprayed 172,000 acres since the first of September.

Good news, Beebe said, was that the mosquitoes he’s seeing are not the kinds that carry the Zika or West Nile viruses.

The county has adopted new times for its weekly meetings. It’s “regular” meeting, held the second week of each month, will be on Wednesday at 10 a.m. while the other “special” meetings will take place once in the other weeks, on Tuesday’s at 1:30 p.m.

The county also announced that the “Slice of Orange” cell phone app, which can be downloaded from iPhones or Android phones, is now working.

It offers a full directory of county departments; instruction on how to register to vote, apply for a marriage license; a listing of county jobs; info to voting locations, county parks, agendas, minutes and videos of commissioners’ court meetings and a link to the county’s road repair and drainage hotline.