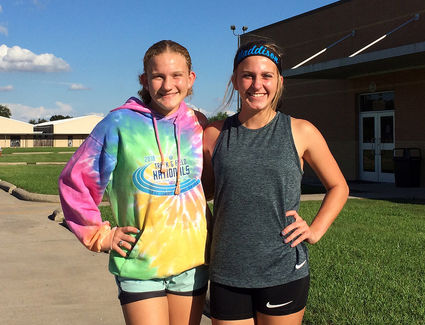 Asked the secret to the fast running by she and her sister, Orangefield ninth-grader Katelynn Helm had a fast twitch reply.

“Something went wrong in our genes,” she said.

But while the two tracksters have had some big moments, it will take a lot to top Tuesday.

“So we have a day named after us?” Maddison reacted.

Stephanie Williams, who has coached both girls since junior high, says there’s a lot more to their success than genetics.

Maddison Helm, a 16-year-old junior, has won two 3,200-meter district cross country meets, and excelled in both the 1,600- and 3,200-meter races at local and district track meets.

Last year, she qualified for state in both cross country and track in UIL competition.

She finished seventh in 3,200 meters in Austin at the Class 4A UIL meet in May.

“When we started the season last year, she was 200th in Class 4A, and she finished 52nd,” Williams said. “Her time has improved since then and we’ve dropped down to 3A.

“She has the fifth-best time in state right now.”

Maybe it’s the push she gets from her sister, Katelynn, who is 14 and competing in high school meets for the first time.

Both sisters competed in the summer Junior Olympics meets, running with no assistance from a running club, which meant a lot of time spent fundraising to pay meet expenses.

Among their sponsors was the Greater Orange Area Chamber of Commerce.

The sisters competed in both district and regional meets in San Antonio and ultimately qualified for nationals, which a meet held at Drake University in Des Moines, Iowa.

Maddison, competing in the 15-16 age group, finished first in the 1,500 and second in the 3,000 meters at both district and regional meets in San Antonio, then was seventh in the 3,000 at nationals.

“That made me an All-American,” she said, reliving the thrill. “That is my coolest medal ever.”

Katelynn qualified for the 14 age group nationals in the 400-meter dash and 1,500-meter run, finishing sixth in each race at regionals.

Maddison just liked pushing herself against the state’s and the nation’s top runners.

“I like the competition because it gives me something to push myself against, and make myself better,” the elder sister says. “Last year [in UIL], I didn’t meet a lot of competition until state.”

The junior is easily beating her high school competition so far this cross country season. She has wins at Claiborne Park, Nederland and Dayton, the only three individual races so far.

After a rainout last week at Barbers Hill, the Lady Bobcats team is set to run at Liberty’s meet this weekend, weather permitting.

“We’re hoping this is a return this week,” Williams said.

“I’m really hoping for our team to get to state this year,” Maddison Helm said.