BC-OF Alliance is volunteers serving together

The volunteers of the Bridge City-Orangefield Ministerial Alliance have taken those words to heart by ministering to the community for nearly 20 years. Nineteen years to be precise, according to Director Melissa Isaacs.

"We have a food bank. We get food from the Southeast Texas Food Bank and we also buy locally from Walmart, Market Basket and The Dollar Tree," she said. "Our biggest ministry is the pantry. We give food out to all of Orange County once a month. We're open on Monday and Wednesday, 9 a.m. to 12 p.m."

The Alliance also give financial assistance for emergency crisis situations, such as utilities or rent, for residents who live in the Bridge City-Orangefield area. For Thanksgiving, food baskets are given to the elderly. Certain rules apply in the baskets distribution.

They can also help with clients' medications.

In addition to their involvement in the Bridge City Christmas parade, the Alliance has a "wonderful program for Christmas," Isaacs said.

For instance, every child in either the Bridge City or Orangefield school districts and are low income get toys, clothes and shoes for Christmas for their parents to pick up. Children under 5 can also visit Santa Claus at the Alliance office.

"I've been director here for five years and Christmas is my favorite time of the year. It's my favorite part of the job," she said.

They also give backpacks full of school supplies at the Alliance for back to school.

"We work really closely with the school to help children in need," she said.

The Alliance had to shut down for a couple of weeks after Hurriance/Tropical Storm Harvey because Isaacs' house flooded. There were also fewer clients and Isaacs attributed that to people either being displaced from their homes or they lost their vehicles. However, things have picked up since then. She said the same thing happened after Hurricane Ike.

"The Alliance flooded then (after Ike)," she said. "Thankfully we weren't hurt this time."

Isaacs said a really neat thing in the aftermath of Harvey was Houston Texans player and NFL Man of the Year award winner, J.J. Watt, whose foundation donated two freezers, a desktop computer, two rolling shelves and a printer to the Alliance.

The Alliance is supported by 19 churches in Bridge City and Orangefield. Pastors serve on the board of directors for the Alliance and they send people in need their way. 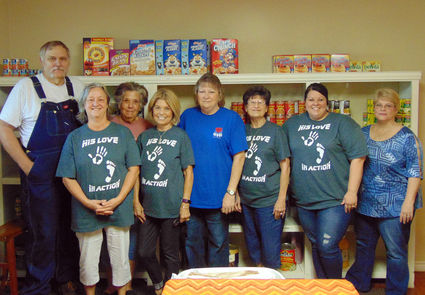 The volunteers for the Bridge City-Orangefield Ministerial Alliance pose in the food pantry on Monday morning. The pantry is also open on Wednesday morning to help those in need.

Isaacs said they average around 40 volunteers, but they could always use more.

"Men volunteers are a huge need, especially in our warehouse," she said.

The Alliance is currently collecting funds for a new building and they are taking donations, Isaacs said. A PayPal link is on their Facebook page at: http://www.facebook.com/Bridge-CityOrangefield-Ministerial-Alliance-629579720422401/.

Their phone number is 409-735-8296 and their email address is [email protected] Their physical address is 285 W. Roundbunch Rd. in Bridge City.