County lifts off into airport business 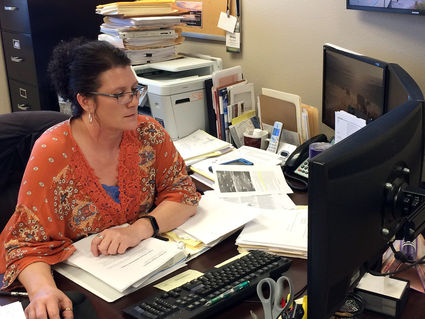 There were few busier places last fall than the Orange County Airport.

In response to Tropical Storm Harvey’s devastation of Southeast Texas, the one-runway, three-hangar airport was home to 200 National Guardsmen and handled 2.8 million pounds of water, snacks, baby supplies and other disaster supplies.

Several C-130 cargo planes and a fleet of military Chinook helicopters shuttled through the airport home to bring the needed goods.

That doesn’t count the many private planes that flew in supplies from religious groups and other Good Samaritans.

Orange County leaders wish to see the airport busy again, but for all the right reasons.

“I don’t think a lot of people realize how significant a role this airport plays for disaster relief, business attraction and agricultural operations,” said Missy Pillsbury, the county’s airport administrator.

Pillsbury has been at the center of a massive change in the county’s participation in the airport.

Sabine Aviation, which had for many years run the airport as the county’s hired Fixed Base Operator, chose not to renew its contract, and the county has been slowly taking charge.

As of the beginning of the 2019 Fiscal Year, which began Monday, it’s all up to the county now.

“We approved an additional person, buying a tractor, some additional equipment,” said Commissioner John Gothia, whose Precinct 3 offices are at the airport on Highway 87.

“We bought some equipment which was a one-time deal. We bought some office furniture with last year’s budget, just things that needed to be upgraded.”

Among the many things needed to take over the operation was a tractor and a couple of huge new fuel tanks. The county is leasing a fuel truck to shuttle between the fuel tanks and the airplanes.

“It’s tough to make money in an airport, and our airport was in a position where we needed improvements made out there, by them [Sabine Aviation] or us,” Gothia said.

“I don’t think they had any interest in moving in that direction. They weren’t making any money.

Pillsbury said the county bought the airport from the Edgar Brown Family in 1973 and built the current terminal in 2001.

“We have jets in here all the time,” said Pillsbury, listing some of the regulars.

A county employee since 2001, Pillsbury started as a tax office clerk, moved up to supervisor there. In 2014, she was named the county’s risk management coordinator and airport supervisor.

From 2015 to 2017, she also served as emergency management coordinator.

“It requires a lot of multitasking,” Pillsbury said of the multiple titles. “It can be a little overwhelming at times and you have to prioritize.”

Among other things, the price of fuel at the airport has negatively affected business over the years, Pillsbury and Gothia said.

Veteran pilots griped that they could get fuel for as much as a dollar per gallon cheaper at other nearby airports.

“He [Sabine Aviation] had to charge extra trying to make his business profitable, but that also drove some business away,” Gothia said.

“Some of our local pilots would fly from here to another airport to get fuel and then fly on to where their destination was. That was another thing for pilots who weren’t local. If they’re going to land at another field to get fuel, then they’re going to stay there.

“We still have a number of people flying in to our plants but they’re flying in somewhere else and they’re driving over here. That means they’re spending money wherever they’re landing at, in those restaurants, in those hotels.”

Pillsbury said airport traffic was up 30 percent since the changeover began.

“The idea is the residual value that we’re going to get off of our airport being fully operational and upgraded a little bit is where we’re going to see the net profit,” Gothia said.