Mark Jones, a Mauriceville native who has worked for the Sheriff’s Office since 1990, was named as Precinct 2 constable Tuesday by Orange County Commissioners.

Orange County Commissioners and a courtroom full of well-wishers were certain Tuesday that they had the right man for the job.

Mark Jones, a Mauriceville native and longtime Orange County sheriff’s deputy, was appointed by a 5-0 vote to take over as Precinct 2 constable, effective next Monday.

A 1983 graduate of Little Cypress-Mauriceville High School, Jones will fill the job left vacant by the recent death of David Cagle.

“We lost a great civil servant in David Cagle. But I think we’ve got someone in Mark Jones that can step into that position and carry on that type of legacy.”

Jones has served with the Orange County Sheriff’s Office since 1990, all in the Patrol Division. The sergeant says he’s been in a supervisory position for about half of his service.

“I’ve known David for many, many years,” Jones said of Cagle. “He’s going to be missed.

“It’s just an honor for the Commissioners’ Court to select me for the position. I can’t think them enough.”

All four Orange County constables next stand for election in 2020. Jones said it was too early to say if he expected to run for a full four-year term then.

“Let me see how I like this,” he said. “My original plan was to retire from the Sheriff’s Office in 2020. But if I really like this, I might ask the people of Precinct 2 to re-elect me.’’

County Judge Dean Crooks said in a recent court meeting that he would ask the other three constables, David Philpott, Chris Humble and Lane Mooney, for their recommendations and thoughts on the process.

Commissioner John Gothia allowed Tuesday that one or more of the suggested replacements were ineligible for the position because they did not reside within Precinct 2.

Precinct 2 runs from the Newton county line to the southwestern side of Vidor and encompasses the City of Pinehurst.

Jones wrote a letter to Judge Crooks and the four commissioners expressing his interest in the job.

“I was actually glad that we had someone come from our local law enforcement that was interested in that,” Commissioner John Gothia said. “I like to have people come from within, so it was good when he did that.

“And once Jones’ name came up, all of them kind of fell in behind him with support. Everybody was positive about it, so it made me feel better.”

Jones said he would be getting with the other three constables for pointers on his new position.

“I already know what to do and how to do it as far as the law enforcement aspect of it,” he said. “I’m going to get with the other constables as far as the civil aspect with it.”

Two days into the county’s 2019 fiscal year, there were no budget shuffling line-item transfers to deal with, so Tuesday’s short agenda went by quickly.

Auditor Pennee Schmitt presented $341,000 in bill payments, which commissioners signed off on.

They also voted to sign a letter of support for removing the Lutcher Drive bridges which serve as I-10 service roads over Adams Bayou, or for replacing them with modern construction.

Homeowners north of I-10 say the 40-year-old bridges were poorly designed and cause their homes to flood with waters backed up by the bridges.

Tom Clary, organizer of the citizen movement, says State Rep. Dade Phelan told him many months ago that the Texas Department of Transportation’s plans were to remove the bridges with the project widening I-10. Clary says TxDOT is telling no decision has been made.

Tuesday’s action by commissioners would include the county’s letter of support to a package of reports and documentation Clary’s group is sending to Phelan, U.S. Rep. Brian Babin and Texas Gov. Greg Abbott.

“We’ve had multiple studies on this thing already,” Crooks said. “Unless we’re going to use the paper to shore up the banks, it’s not going to do anything.” 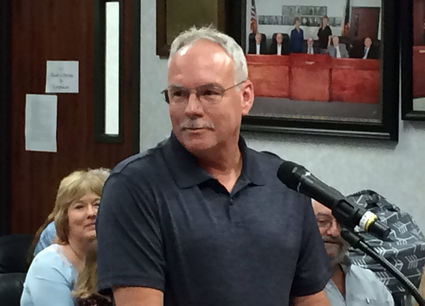 Commissioners also approved a letter of support for a Lamar University drainage and sediment study.

In an annual procedure, the commissioners’ court authorized county employees to close their departments from 11 a.m. to 1 p.m. Dec. 8 for Christmas celebrations.

As has been his pattern, Precinct 4 Commissioner Jody Crump was on the losing side of a 4-1 vote.

“If you want to have a party, have a party without the taxpayers paying for it,” he said.