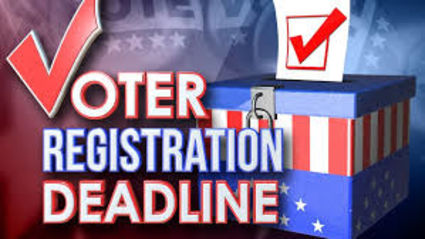 If you are not registered to vote but are eligible and want to take part in the Nov. 6 general election for national, state and county offices, Tuesday, Oct. 9 is the deadline.

Texas law says an eligible voter must be a U.S. citizen, be a resident of Orange County, be 18 years old, not be a convicted felon, and not be declared mentally incompetent.

If you are unsure if you are registered, call Orange County Elections Administration at 409-882-7973.

Call the same number to find out how to register.

In most races, incumbents face at least one opponent, and sometimes two, with the Libertarian Party providing a third in many state races.

There are a total of 19 state races on the ballot, including Attorney General, Railroad Commissioner, Agriculture Commissioner and three seats on the State Supreme Court, which is not a lifetime appointment in Texas.

Locally, there are five county-wide offices on the ballot, though in each the Republican candidate is unopposed.

Likewise, Precinct Commissioner 4 is a one-party only race where the winner was voted in March primaries.

The only contested county races for Nov. 6 will be Precinct 2 Commissioner where Republican Theresa Beauchamp takes on Democrat Deborah Mitchell and for Precinct 1 Justice of the Peace where incumbent Republican Hershel Stagner, Jr., is opposed by Democrat Gail Barnett.

Additionally, patrons in the West Orange-Cove school district will vote on a $27.8 million bond issue for district improvements.

The Orange Public Library is also the spot for early voting in the WOCCISD bond election.

Early voters may cast their ballots at any of the four sites.

On election day, Nov. 6, voters must cast ballots at their precinct sites. Election day voting runs from 7 a.m. to 7 p.m.