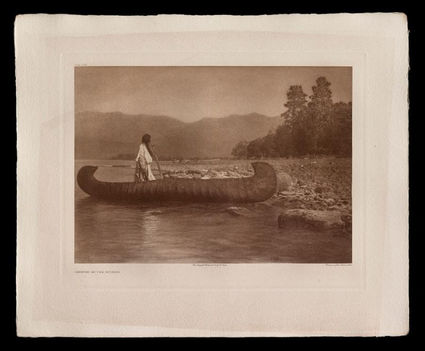 (ORANGE, TX) – Lasting Impressions: The Work of Edward S. Curtis opens at the Stark Museum of Art on October 27, 2018. Dr. Sarah E. Boehme, Curator, will offer a lecture at 4:00 p.m. in the Museum’s Education Center; a reception with light refreshments and soft drinks will follow. The Museum will remain open until 6:30 p.m.

Curtis's “big dream” was to document traditional Indian life through his photogravures, writings, and sound recordings. Over 100 images and books from his project The North American Indian are on view. Also featured in the exhibition are other recent acquisitions of Curtis works. A copperplate shows the process Curtis used in the production of the photogravures. An orotone, a photograph printed on glass with gold-toned effects, presents the photographer’s romantic imagery.

In 2013, the Museum purchased a complete set of The North American Indian, which includes twenty portfolios of exquisite photogravures, along with twenty bound volumes of text and additional illustrations. Curtis published descriptions and images of Native American peoples from throughout the American West during the years 1907-1930.

“Edward S. Curtis produced an astonishing body of work in his project The North American Indian. He made beautiful photographs including sensitive portraits and compelling scenes portraying traditional cultural life. Yet his project raises questions about his devotion to his goal. We at the Museum invite the public to engage with this extraordinary project and the stories of people that it portrays,” commented Sarah E. Boehme, Curator.

Stark Museum of Art is located at 712 Green Avenue in Orange, Texas, and is open Tuesday - Saturday, 9:00 a.m.