It's never too late to start 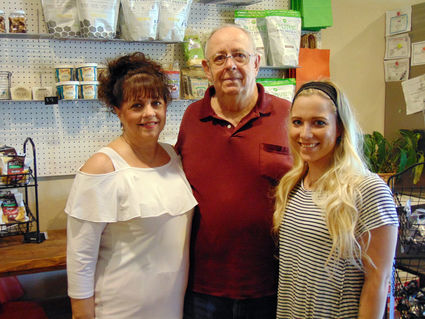 CUTLINE: James Hufstetler has lost weight and improved his health since he started eating healthy at Fresh Prep in Bridge City. To his left, is Manager Beth Hanks and to his right, Operations Manager Maddison Bouget. RECORD PHOTO: David Ball

James Hufstetler, 72, of Orange, confessed he used to eat everything, but as he grew older that caught with him.

The secret to Hufstetler's success is he changed the way he eats with help from Fresh Prep - Clean Meals To Go in Bridge City.

"I feel better than I did six months ago. I heard about Fresh Prep through The Penny Record," he said.

He retired from Kansas City Southern Railroad after 30 years.

Hufstetler was on medication for diabetes. His general practitioner did some blood work and discovered a problem with his kidneys. The kidneys specialist was about to put him on dialysis. However, he said it was hard for him to put together a diet plan because there's so many foods he can't eat.

"That's why I was lucky to find Fresh Prep," he said. "Everything is done in portions and I've lost quite a bit of weight. I had to take shots for Type II diabetes once a week. Now, the doctor has taken me off all my shots. The kidneys doctor tells me to keep doing what I'm doing. I'm doing my blood work at the end of the month and I may not have to go on dialysis. The way I'm eating I hope the blood work is in good order."

He's also off insulin and his high blood pressure medication may have to be readjusted later this month because of his good results.

Beth Hanks, manager of Fresh Prep, said Hufstetler eats their food five days a week on the deluxe program that is customized to his diet. He started on the six day plan but he soon discovered it was too much food for him to eat.

For the most part, he said he likes the food and he has some favorites such as jambalaya and beef and okra. There's also lots of chicken in his diet. He admitted every once in a while he'll cheat for a meal and eat a burger.

"It's hard to change eating habits at any age," Hanks said. "Keep doing what you're doing. Lots of doctors push pills and they don't think about how the food we eat is just as important.

Fresh Prep is running a special this week of $10 off a customer's first package and $50 for seven healthy balanced meals.

Fresh Prep is located at 2467 W. Roundbunch Rd. in Bridge City. Their contact information is [email protected], their website is http://www.freshpreptogo.com, on Facebook at FB: FreshPrepLLC and their phone number is 409-719-8941.