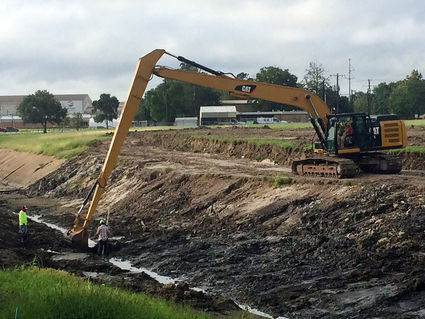 A giant excavator scoops dirt from the Cooper’s Gully project near Pier Road and Simmons Drive at the Orange Boat Ramp Tuesday. The project has been delayed by daily rains.

Chalk up another rain delay for the Orange Lions Club Charity Carnival.

Officials with the service club decided Monday night to postpone the event for the second time in as many months, moving it this time to Nov. 7-10 and Nov. 14-17.

This after the 2017 Carnival was canceled by Tropical Storm Harvey.

Since August, club members have not been able to set up the rides and carnival booths at Lions Den Park because of wet grounds.

“We don’t want people driving around on the wet grass [for set up], and have it rutted up for the carnival,” Williams said.

“Getting the big rides is a big task, but we want to get this done for the community. I know the community’s ready for it.”

How wet is it?

Afternoon thunderstorms Tuesday made it nine September days out of nine that Southeast Texas has received a little or a lot of rain.

And this after raining 27 of 31 days in September.

In September, officials documented 13.14 inches of rain, more than twice the “normal” for that month, 5.97 inches.

“There’s not any one explanation,” Rob Megnia of the National Weather Service in Lake Charles said recently. “We had two frontal boundaries stalled and a small tropical wave.”

The launch of http://www.setexasrain.org provides access to user-friendly information and data. It displays rainfall, streamflow and water levels in major streams, bayous and reservoirs for the counties of Orange, Hardin, Jasper, Jefferson and Newton.

“This website gives everyone direct access to what’s happening where they live, whether they are there or away from home.”

Also, Orange County and a number of local governments and Chambers of Commerce have established Slice of Orange, an app that connects all the communities.

This app is available from the Apple and Android stores.

Among the many activities slowed down by the rain are water and drainage construction projects by the City of Orange.

Work to cement Cooper’s Gully near the Orange Boat Ramp has been more off than on because of the wet weather. Tuesday morning, workers were busy.

“That’s a drainage canal project and it handles water from 16th Street all the way down to the pump station,” said Jim Wolf, Orange’s Public Works director.

“If there’s a heavy enough rain event, it washes everything out and they have to start over. It’s a tough time to be working on drainage canals.”