Orangefield is on the move against Kirbyville as Kade Grozier picks up yardage for the Bobcats. Orangefield defeated Kirbyvile 31-20 at F.L. McClain Stadium. This week the Bobcats go on the road to take on East Chambers. RECORD PHOTO: Darren Hoyland

Orangefield’s football team is looking to push its record in District 12-3A Division I games above .500 Friday when it travels to East Chambers.

The Bobcats defeated Kirbyville 31-20 last week to improve to 4-1 on the season, 1-1 in district play.

Gunner Jones stepped in for an injured Mason Gonzales at quarterback and ran for one score, passed for another.

For the season, Orangefield is averaging 313 yards and 35 points per game while allowing 161 yards and 11 points per contest.

Heston Puckett continues to lead the Bobcats in rushing with 278 yards but Bradley is close with 253 yards and Gonzales, who is out for the season, had 215 yards.

Both the host Cardinals and visiting Little Cypress Mauriceville should be well-rested for their league opener, having had open dates last week.

Both carry 1-4 non-district records into the game.

The Bears’ lone win came Sept. 28, a 30-18 decision over Hardin-Jefferson after opening the season with losses to Woodville, WOS, Jasper and Vidor.

Quarterback Adam Pope heads LCM’s offense with some big help from Darien Williams and James Williams. The two are not related but both are nicknamed “D.J.” which has caused a bit of confusion so far.

A week ago, they were interchanged on the stat sheet prepared by the coaching staff.

Mustangs look for restart in 10-4A-II

After playing their usual playoff-caliber non-district games, West Orange-Stark’s footballers get down to District 10-4A Division II basics, opening league play at home against Silsbee Friday.

Jasper dropped the Mustangs 34-24 last week at the Dawghouse in Jasper, despite a big night for the WOS offense.

Quarterback Tyrone Wilson completed 10 of 20 passes for 251 yards, setting up three TDs for running back Kayvn Cooper, who rushed 18 times for 86 yards. 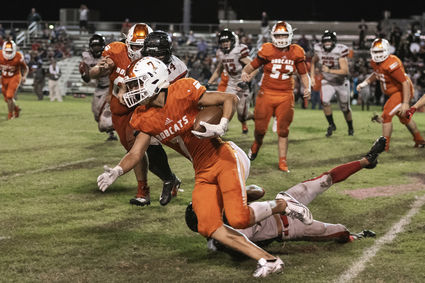 On the season, the Mustangs are averaging 162 yards rushing and 157 yards passing, 319 total yards and 23.5 points per game.