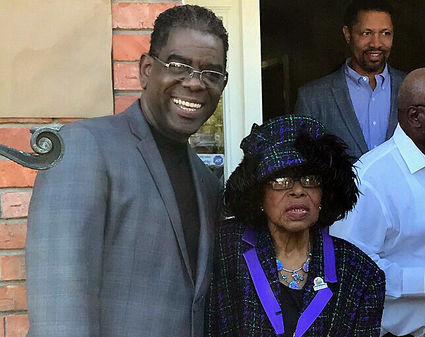 Essie Bellfield was the first African American woman mayor and Councilwoman in Orange. She is pictured here with the Rev. Develous Bright, pastor of Salem UMC in Orange. The education unit for the church was named after Bellfield in her honor.

Essie Bellfield, former mayor of Orange and Councilwoman, has been a longtime member of Salem United Methodist Church in Orange for decades.

In response to such dedication the church held a worship service this past Sunday and dedicated the education unit in her honor by naming if after her. They also unveiled a plaque and served dinner on the grounds, according to the Rev. Develous Bright, the church's pastor.

Bellfield can truthfully say she has served on ever committee in church and held every position except pastor.

"She enjoyed it," he said. "She was instrumental in abolishing the electric chair for capital punishment. There's a lot of history there. The Top Ladies Of Distinction and the Heroines of Jericho were there. Nobody is more valuable than Sister Bellfield. She's a living piece of history and a role model. She's been mentoring a generation of leaders at city hall."

Bright added since Bellfield is advancing in years, it's good the city named the activity building after her as her church is renaming a building and making it public.

"She's irreplaceable," Bright said. "She was a straight talker in politics. She was the first African American mayor in Orange. I hope she leads a groundswell of women going into politics. She's a role model for this. She's truly a pioneer. She overcame stereotypes that a woman can speak with forcefulness and leadership like a man."

Annette Pernell, Orange City Councilwoman, wrote a biography about Bellfield for the naming of the building at Salem UMC.

Born Essie Lagard on May 6, 1932 in Pittsburg Pennsylvania, Bellfield was the only child of Albert Leo Lagard, a Lumberjack, and Ollie Byrd Keaton-Lagard, a maid. The Lagards moved from Pennsylvania when she was six months old to Jennings, Louisiana. Bellfield graduated from Jennings High School and attended Southern University in Baton Rouge where she majored in elementary education.

Bellfield said she wanted to become an attorney, but her dream went unfulfilled.

Eventually, she came to Orange to live with her mother who was working in one of the homes of a prominent business owner on Pine Street.

Bellfield later moved from Orange to Galveston with her two daughters where she worked at John Sealey Hospital. It was in Galveston Bellfield first got her taste of politics.

She met Aaron Schwartz who was running for public office. She volunteered to work with him on his campaign. Schwartz was elected to the Texas House of Representatives and then the Texas Senate.

She also worked on the campaigns of former Governors Dolph Briscoe and Mark White.

Bellfield said “I’ve always felt that every human deserves rights so I wanted to work hard to make sure that goal was reached."

Eventually, she and her daughters packed up and moved back to Orange where she secured a managerial position at Baptist Hospital.

"Her desires for the betterment of others enticed Essie to create an additional precinct and run for Justice of the Peace. Although she won her position, the victory was short lived because the city did not accept or approve the additional precinct," Pernell wrote. "Not allowing that to stop her, in 1994 when a seat became open on City Council, she ran and won."

She was appointed mayor pro teem by her peers. She stepped up as mayor in 1997 when Mayor Jim Gilliam died. In 1998, she officially ran for the mayor and won, becoming the city’s first African American woman to be electedmayor.

"Ms. Bellfield has remained active throughout the city of Orange and has been the recipient of numerous awards," Pernell wrote. "She continues to be an outspoken and diligent member of Salem United Methodist Church, she belongs to several organizations to include a lifetime membership to NAACP, Top Ladies of Distinction, and Council of Negro Women to name a few. Ms. Bellfield recently lost her re-election as Orange City Councilmember for District 3, but as she says, she is still fighting for the entire city and she has plans to run again as long as there is breath in her body.

"The city of Orange, mayor and Council unanimously voted in July, 2018 to rename the senior center after Essie L. Bellfield and her home church decided to honor her as well."