TxDOT projects hindered by the rainfall 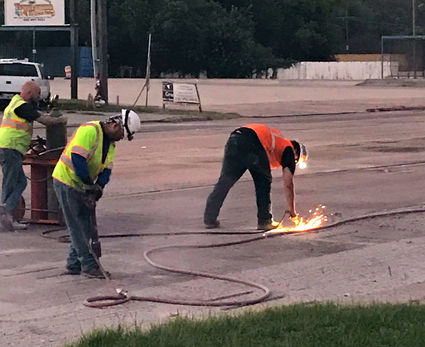 Workers are repaving Texas Avenue in Bridge City at night this summer. TxDOT gave an update of this project and others around Orange County.

Mother Nature is to blame.

Weather is holding up some of the three major Texas Department of Transportation — repaving Texas Avenue in Bridge City, completing the swing bridge over Cow Bayou on East Roundbunch Road and widening Interstate 10.

"On Texas Avenue, crews should begin paving by the end of October. The wet weather has held up operations," she said. "We’re currently looking at the first of the year before work will be seen on East Roundbunch Road at Cow Bayou. The motor and electrical units are still being worked on."

Construction begun on Texas Avenue in Bridge City a little more than a year ago in July —a month before Tropical Storm Harvey hit.

Work, however, continued throughout the year with a completion date targeted for the winter, according to Dupre.

She said three months ago crews were repairing the base overlaying the roadway with asphalt for the $5.6 million project. Funding for the project is from TxDOT. Old Castle Materials of Beaumont is the contractor. Crews were doing the work at night.

"It's 65 percent complete (in July 2018). It will be completed by the end of the year," she said. "They started in July 2017 and they have not used up all of their days. They're assigned so many days under contract."

However, the project may now be behind schedule.

Thus far, Texas Avenue has been paved from Ferry Drive, eastward to Roundbunch Road. From there, the road should be paved to FM 62.

The other big project, reconstructing and widening Interstate 10, is scheduled to start in 2020. The roadway will be widened from FM 1442 to FM 3247 (MLK Drive) to three lanes eastbound and westbound. The next phase will be from FM 3247 to the state line with Louisiana.

"We're waiting on work to be done on the westbound side," Dupre said. "The last section will start in 2021 to the state line. There will be six lanes from Orange to Beaumont."

The westbound frontage road along Interstate 10 at Adams Bayou tends to flood when it rains. Dupre said currently there are no plans for any construction. The water is flowing north due to the tide.

"It's not backing up because of the roadway. Our projects are planned years in advance. We have to get permits, funding in place, environmental studies and do community outreach. It's a several year process," she said.

For East Roundbunch Road Swing Bridge project, a span from the bridge had to be taken off, placed on a barge and taken to an offsite location to be worked on. The $11.4 million project also started in July 2017.

Peggy Albair owns Peggy’s Place on East Roundbunch Road next to the bridge and said her business is suffering with the bridge out. She said in a prior Record article she originally thought construction on the swing bridge on Cow Bayou would be completed and reopened by the end of August or in November at the latest. She was informed by work crews, however, it may be next year before the project is completed. Part of the delay is they need a machine part custom made.

“They need a part that makes it swing out that’s the issue.

They said they were going back to Houston.

We haven’t seen anyone working there.

They’re putting a hurt on us,” Albair said.Clark Slacum, county engineer for Orange County, said he spoke with Texas Department of Transportation personnel who told him they anticipate the bridge to be completed in either January or February of 2019.

Dupre said in August the bridge project was 60 percent completed.“We anticipate it being completed and returned in January.

Currently the contractor (Ragel) is working on the approaches to the bridge.

After the approaches are completed, drivers won’t see any work until we get the swing span back,” Dupre wrote via email.

“The work to the swing span is taking longer than originally anticipated.

We currently anticipate the bridge reopening in spring.”