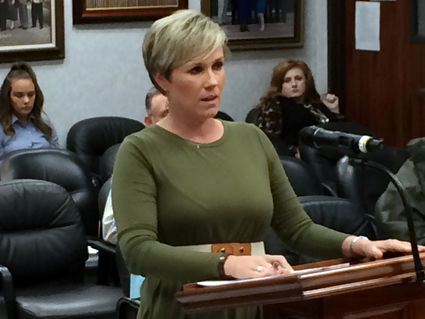 Crooks also suggested setting limits on how large and how long the abatements – the forgiving of taxes for a set period – or incentives – the county foregoing utility charges – should be.

“If we can arrange it, I’d like to let Orange County business owners have their voices heard,” Crooks said.

“If everybody says ‘No, no limits, the sky’s the limit for abatements,’ fine. But I want some input. Right now, I feel like I’m groping around in the dark for an answer.

“I want to know what business people in Orange County, particularly ones who have not benefited from anything from the county, feel about this and how we should proceed and go forward.”

“Everybody’s offering abatements,” Burton said. “We’re not offering anything special when abatements come up. We need something special to increase the likelihood of getting some of these projects.

“We send Jessica into a gunfight with a knife. And most of the time, it’s a plastic knife.”

“We’ve got to fight a little harder,” she said. “We’ve been doing the same thing that everybody else around us has been doing for the last 30 years. And they’ve won and we haven’t.

Crooks was outvoted 4-1 in September when he recommended cutting the OCEDC’s budget.

The judge asked that the commissioners, Hill and others work to see if there’s a date soon they could take part in a town hall.

Commissioners agreed to take $5,300 from the 2019 contingency budget for a new radio and batteries for the Precinct 4 constable’s office.

She said as many as 50 county restaurants would be providing samples for 400 diners. Tickets are $20 each for the fundraiser that benefits Disaster Rebuild’s Unmet Needs Table for those still recovering from Harvey.

Texas Liftfund is offering business owners affected by Harvey interest-free loans of up to $35,000, with $1 million set aside for Orange County, said Ida Schossow of the Greater Orange Area Chamber of Commerce.