Lamar State College-Orange has a new skipper at the helm 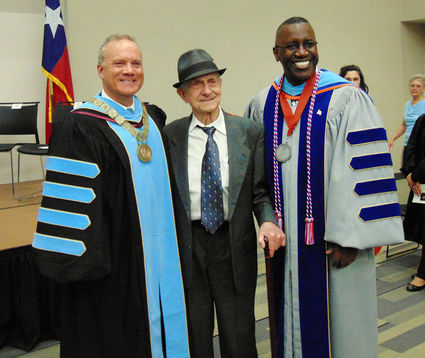 Tom Johnson, left, was installed as the new president of LSCO on Tuesday afternoon at the Shahan Events Center. Here, he's pictured with his father, Otis Johnson, and Lonnie Howard, president of Lamar Institute of Technology.

Thomas Johnson, a Port Arthur native, was installed as president of the Lamar State College-Orange Tuesday afternoon in a ceremony at the Shahan Events Center on campus. Johnson was joined onstage by regents of the Texas State University System and other college presidents. Family, friends and mentors were also in attendance in the audience to support Johnson.

Regents, staff and students addressed the audience too. Brian McCall, chancellor of the TSUS, gave the charge to Johnson as president.

Johnson spoke on his background and how he got to where he is today. He thanked the regents, faculty, staff, friends and family, and former LSCO president Michael Shahan for laying a good foundation of growth.

For instance, he was born on 42nd Street in Port Arthur 56 years ago. It was while he was working in a sawmill in east Texas that he decided he wanted a better life and attend college though he didn't know if he could attend. Though he wasn't a stellar student, his teacher at Angelina College, Ruth Bass, encouraged him through college. He even joined Phi Beta Kappa honor society.

Johnson worked for U.S. Rep. Charlie Wilson too. He said that experience opened doors for him and made him he want to do better.

He spent 20 years as a Houston police officer. He said his chief, Clarence Bradford, believed in him and he moved up through the ranks. Johnson retired from the HPD in 2004.

He retired from the HPD in 2004 and started his second career in education as an instructor and administrator at Tyler Junior College.

Michael Metke, chancellor of TJC, said Johsnon was loved and beloved at the college.

Metke said Johnson rose to the top with his positive energy and he was an excellent history instructor. He built a top police academy there that won national recognition. He made the campus safer, friendlier and more welcoming. Criminal justice class enrollment doubled under Johnson.

Metke added a hurricane can be beneficial to an area suffering drought and "Hurricane Tom is coming here, but it will be beneficial."

"Education is the great equalizer," Johnson said. "The U.S. Constitution prevents a society of nobility and one's place is not a circumstance of birth."

He wants LSCO to foster social mobility and regional prosperity and for the college to be the economic engine for the region.

"Be part of your community. If you have benefited don't build a higher fence, build a longer table, We're all God's children," he said. "Everyday I start on my knees asking for wisdom to lead this college and for us to do great things.

"There is not going to be a day where I only give 50 percent. I don't know how to do things halfway."