McDowell took the oath of office from Sherry Tisdale, who is retiring, at the regular meeting of the Bridge City City Council. Tisdale was named city secretary in 2003. She has a two-year degree from Lamar University in office administration. She started working for the city part-time in 1984. Prior to that she worked at Texaco Refinery in Port Arthur. In 1987, she started working more than 40 hours a week in utilities billing after the city took over the water district in 1986.

Tisdale, furthermore, is no newcomer to Bridge City. Her parents had deep roots in Bridge City and in Orangefield and they also were involved in public service. Her mother was also the city secretary and her father served on the Bridge City ISD Board of Trustees. Her mother was also the secretary for the Bridge City Chamber of Commerce. The Chamber didn’t have a building yet and her mother placed a typewriter on the dining room table for Chamber work. Additionally, the Chamber’s phone number was their home number.

McDowell said she has 27 years of experience with the city and she’s currently serving as director of personnel and purchasing.

Henry is the daughter of Shelly Smart and Al Henry. She is a native of Bridge City and a 2015 honor graduate from Bridge City High School.

Her many honors as a student-athlete were outstanding outside hitter, a two-time Beaumont Enterprise Super Gold Tea, and the TGCA All State Volleyball Team, four-time All District Honors and named the MVP for the Lady Cardinals' historic 2015 basketball season where the team competed in the regional quarter finals for the first time in the school's history; in her four year career at BCHS, she amassed a total of vie school records including the 100m and 200m dash, 400m relay, and the high jump.

Clearing a six-foot jump at a district meet, she as ranked second in the nation; a three-time state competitor, she won gold twice and broke an 18-year old state record of 5' 10.25" in seemingly impossible conditions; and she was named the 2014 female athlete of the year at the USA Track and Field competition.

Henry graduated fifth in her class and continued her education and athletic career at the University of Texas-Arlington. 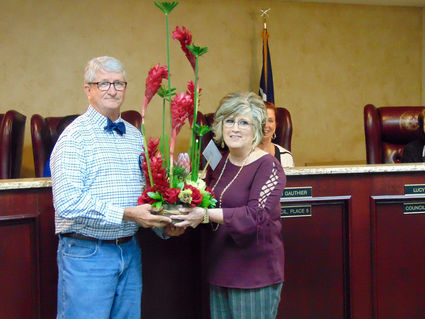 Sherry Tisdale received a plant in appreciation for her years of service to the city at Tuesday's meeting. Tisdale is retiring as city secretary after more than 30 year with the city.

She has also received the Texas Trust Scholar of the Week and voted Peer Leader of the Year.

In other Council business, City Manager Jerry Jones said the city did have a $211,000 deficit for employee overtime pay after Hurricane/Tropical Storm Harvey. Since then, the city has made up that deficit and they now have $700,000 in the coffers.

All of the City Council, City Attorney Paul Fukuda and Mayor David Rutledge said this year's Texas Municipal League annual conference was one of the better ones they attended.