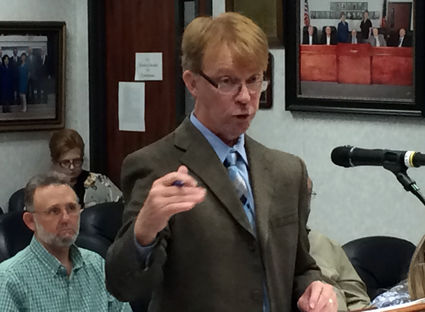 More than 50 years after “Lost In Space” introduced robots to many earthlings, Orange County is going into the robot business.

On a day that saw the county government agree to terms on a short-term $8 million loan, and get good news on delinquent tax accounts, county commissioners voted 5-0 at Tuesday’s weekly meeting to OK a purchase of a $19,000 tactical robot for use by the Sheriff’s Office SWAT team.

The money to pay for it is not coming out of county coffers, but rather from the Sheriff’s Office Drug Forfeiture Fund.

“Technology’s a wonderful thing,” Sheriff Keith Merritt said. “It’s out there. You’ve got to pay for it.”

Merritt did not have a photo of the robot available Tuesday but an Internet search for Transcend Tactical’s Vantage F3 Robot showed a machine much smaller than the six-foot tall space robot of black and white TV days.

It looked like an oversize Roomba but this one can climb stairs. It also carries a camera and good-sized cargoes. It is operated remotely by an operator, like a drone.

“We’re pretty excited about this piece of equipment, to utilize in SWAT operations,” the sheriff said. “There’s actually other operations than SWAT that you could utilize it if you just didn’t want to send a person into some area to check things out.

“But mainly it’s for SWAT operations, to protect someone or keep one of the SWAT officers out of harm’s way.”

The commissioners liked the idea of any idea that keeps county employees out of harm’s way.

“I’d much rather make an insurance claim on a bullet hole in a robot than a person,” Commissioner Jody Crump said.

Merritt he plans to share the robot with other neighboring law enforcement agencies, if requested.

“It’s available to anybody,” he said. “Jefferson County is pretty well covered, but say Newton County or Jasper County: it’ll be available to them.

“We’ll send the robot and operator, if they’re requested.”

A shortage of timely reimbursements by the federal and state government for damage caused by Tropical Storm Harvey more than a year ago led County Judge Dean Crooks and commissioners to ask staff to check on short-term loans to get the county through the final three months of this year.

Tuesday, they agreed to an interest rate of 3.4865 percent, plus an $8,000 fee to the Texas Attorney General and the bond counsel.

But commissioners hope to use no more than $2 million of the “County Tax and Revenue Anticipation Notes” and to pay it back by the end of January, assuming the usual payment of county taxes around the first of the year.

And, meanwhile, everyone is hoping a $2.5 million FEMA check “in the pipeline” becomes a reality sooner than later.

The hour and a half meeting began with a report by Steve Bird of Linebarger Law Firm, the county’s outside collector of delinquent taxes.

Bird said the county was due a total of $3.5 million on delinquent taxes, of which 82 percent, nearly $3 million, was on real property. The remaining 17 percent was split between trailer homes (9 percent), personal property (7 percent) and mineral accounts (1 percent.)

Bird pointed out that the 9,447 delinquent accounts in the county included 1,567 trailer homes, but said with an average on the trailers just $200, they were “not worth the lawsuit.”

Commissioners did agree to list their auction properties online through Linebarger.

They agreed to pay $417,000 in bills and announced that at noon on Thursday Oct. 25, the Orange County District Attorney’s Office will host a walk for Domestic Violence Awareness Month.

The walk will be short, from the courthouse, down division to 5th, down 5th to Front, Front to 7th and back to the courthouse. Walkers are asked to wear purple.