Congrats to the Bridge City 8th Grade Red Team Lady Cardinals ---undefeated district champs!!! Monday night was a great match between HJ Hawks & BC Cardinals who were both 6-0 in district play before facing each other.

The Lady Cardinals swept the Hawks 25-18 and 25-15 claiming the sole title of Undefeated District Champions!! Coach Wiegreffe could not have been more proud of the team work and fight the girls showed in their last game of season.

Gracelon Freeman, Kristine Cervantes, Makenna Carey and Amaris Larkin were all outstanding with back row play.

The Lady Cardinals had their best night of the season behind the service line.

Gracleon Freeman led the team with a perfect night from the line with 15 serves with 3 aces. 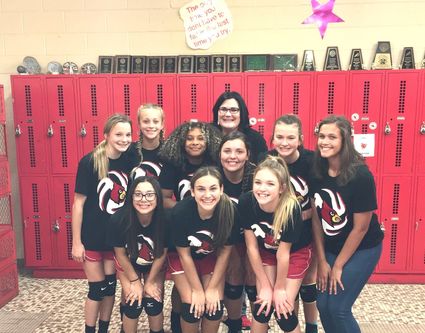 Doiron & Perry also led the way in hitting with 6 attacks each followed by Marlie Strong with 4 attacks.