Photo: Bridge City’s Kaylen Smith, left, checks her watch as she talks with coaches Karen and Bryan Bozman before practicing for the Nov. 3 state meet earlier this week.

Bridge City is going back to Round Rock.

Thanks to District 22-4A champion Kaylen Smith, the Cardinals will represent at the State Cross Country Meet Saturday in Round Rock.

“Our battle cry this year is #bring back champions,” coach Karen Bozman said, “and we were able to get both our boys and girls out to regionals.

“We knew Kaylen was a contender for state, and we had a boy [Caden Shaw] that was close. We’re excited to be going back to Round Rock. I think 2012 was our last trip with a girl.”

A sophomore, Smith improved her two-mile time by nearly two minutes in finishing 13th in the recent regional meet in Huntsville. The top 10 finishers who are not a member of a top-four team advance to state, which is how Smith qualified.

“I’m just excited to go,” Smith said when asked her state meet plans. “I want to at least beat my regional time, 12:58.

“I’m just thankful to go. Most of the people there are juniors and seniors.”

Smith has been competing in races since the seventh grade.

“I took first in everything in junior high,” she said.

As a freshman, she placed second in district to Orangefield’s Maddison Helm and missed qualifying for the state meet by two places at regional.

“By about this much,” Coach Bryan Bozman said, holding his hands about a yard apart.

Orangefield dropped to Class 3A this year and Smith said she sometimes missed the competition.

But a new training method helped.

“I tried to leave the girls and keep up with the guys at practice,” she said. “Last year, I felt bad about leaving the girls behind.” 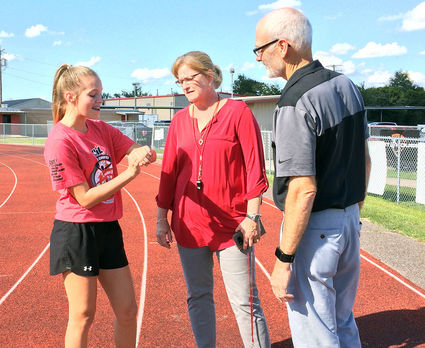 Smith was serious about having a strong sophomore year.

“She is a hard worker, one that doesn’t let things get in her way. We started running at 6 a.m. in the morning on July 10.

“She was very dedicated to be here. She made lots of sacrifices, and it’s paid off.”