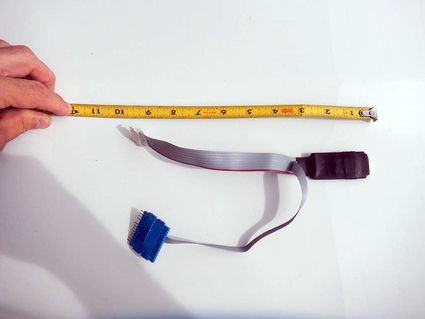 Photo: This is a credit card skimmer confiscated by the Orange Police Department. A skimmer was discovered at a filling station in Bridge City this pas weekend. Law enforcement officers caution residents to notice things such as shaky card readers, flashing lights, cameras, etc. before using.

Orange Countians, guard your credit cards because the skimmers are here.

Amanda Longmire, of Bridge City, said her fiance almost fell victim this past weekend from a skimmer. He was at a filling station in Bridge City on Saturday afternoon, filling up his motorcycle with gasoline.

On Monday morning, their credit union fraud department called them within 30 minutes of their card trying to be used in Waxahachie. Disaster averted.

"I don't think they can do much (apprehending the perpetrators)," she said. "No money was lost. We usually use the app at the Exxon-Mobil station to pay for gas."

Capt. Robert Bergeron, with the Bridge City Police Department, said his department hasn't heard anything about skimmers in the city for a long while.

He explained the way skimmers work is the person will gain access inside the pump, hard wire the device that saves credit card information in a storage device. From there, they will plug the device to a computer to access the data and reprint new debit cards to use. They can also use Bluetooth technology to download information instantaneously.

"Don't use debit card at the pump. Your whole bank account is compromised," Bergeron said. "Before using, see if the card reader moves. If it seals. Some pumps are tamper proof. Check the keypads. 3-D printers can now print keypads they use."

Also, don't use the pumps if you see blinking lights or cameras. Look at the keypad and check if the security tape has been broken. If so, use the keypad inside the store.

Bergeron said the technology is probably relatively simple to use. One could probably learn how to do it watching a YouTube or Google instructional video. These operations are usually done by large rings of perpetrators. One such ring stretched from the Rio Grande Valley to New Orleans.

No skimmers have been found on ATMs in Bridge City, he said. After the information is collected from a gasoline pump it is then used to make a withdrawal from an ATM.

To avoid skimmers, Bergeron recommends using the pump closest to the clerk inside the store. Suspects target pumps not easily visible.

Det. C.J. Foreman of the Orange Police Department said his department collected a handful of skimmers last year at gasoline pumps. Ten of them to be exact with three collected at one station. However, he said Beaumont and Port Arthur collect "tons of them" more than Orange does.

"We were never able to identify anybody," Foreman said. "We work jointly with the Secret Service who is building a database. They think this comes from organizations from overseas."

Foreman explained skimmers as inline memory motherboards that are plugged and read when a card is swiped.

"It's plug and play. They're in and out in 10 seconds. It's hard to tell when there's a skimmer in there," he said.

Some telltale signs, however, are the card reader wiggling or error codes or off codes on the screen. Foreman said the safest thing against skimmers is to carry cash though there's the risk of getting robbed.

"It doesn't matter if it's a debit card or a credit card. Gas stations along the interstate are more prime targets," he said. "Pilot and Flying J have alarms when someone opens the pumps, though it's expensive."

Outside the city limits, Det. Janois Strause Grizzaffi, with the Orange County Sheriff's Office, said they haven't responded to a skimmer call for some time. The last time being May 17.

"That doesn't mean it will be the last one. They're inserted and you may not know about it," she said. "Fraud and abuse is a big problem. There are more reports than catching a reader."