Lions Club keeping their head above water to host carnival 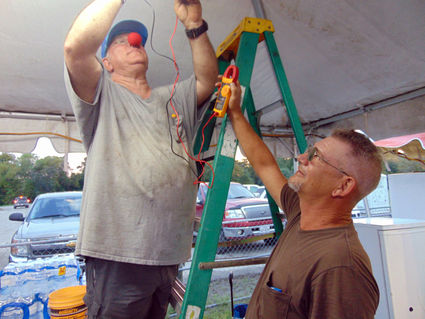 Electrician Kevin "Radar" Kelly does some last minute wiring on a light before the Orange Lions Club Charity Carnival opens tonight in Orange after several delays due to the weather. Rusty Honeycutt helps Kelly with the project.

Good things come to those who wait and the Orange Lions Club has been waiting for a long time.

Heavy rains and soggy grounds postponed the Orange Lions Club Charity Carnival to set up at its typical time in late September and early October, until now. Pam Honeycutt with the Lions said the carnival is a go for tonight. There will be a tribute to veterans at 5:45 p.m. at the Main Street entrance to Lions Den Park. The ribbon cutting ceremony will be held at 6 p.m. and the gates open nightly at 6:30 p.m. with entrances at MacArthur Drive and Main Street. The carnival will run from November 7-10 and 14-17.

She added parking may be somewhat difficult due to soggy ground and to take that into consideration. The Boy Scouts of America will assist with parking. Additionally, new parking lot lights have been added by Entergy.

"There was a chance the carnival couldn't set up because of the rain," she said. "We've set back as far as we could but with the holidays coming up and hunting season opening. Hopefully this is a one year thing that we had to push it back so far."

Honeycutt said there was a similar situation with the carnival many years ago because of too much rain. The carnival stayed up for more than 30 days. Finally, the carnival wasn't held that year because of all the precipitation.

Carnivals have also been canceled during World War II and for hurricanes.

"The park is going to be muddy because of the rain, but there are nice designer rain boots for women they can wear. We need a good carnival since there was no carnival last year. People say it brings back a sense of normalcy."

Honeycutt explained other Lions Clubs depend on the Orange carnival to make money for them. Club members will schedule their vacations around the carnival so they can work it.

As usual, she said there will be delicious food served such as hamburgers, links, funnel cakes, chocolate dipped strawberries, pork-a-bobs, popcorn and cotton candy. And there will be games such as the dime toss, bingo, and high striker with a chance to ring the bell, a photo booth and face painting by the Stark Museum of Art.

An inspector said the rides are in excellent shape to the Lions' relief since they didn't operate last year.

In a prior Record article, Sandra Williams, president of the Orange Lions Club said they started setting up rides September 7.

Proceeds from the carnival help with Lions projects such as traveling to Kerrville and cleaning the youth camp before it's in session during the summer.

"We help a lot of people with this carnival," Honeycutt said. "We're able to buy from $5,000 to $7,000 worth of eyeglasses. It goes to the community or for causes the Lions Club supports. It's a worthy cause. It goes back to the form of Lionism."