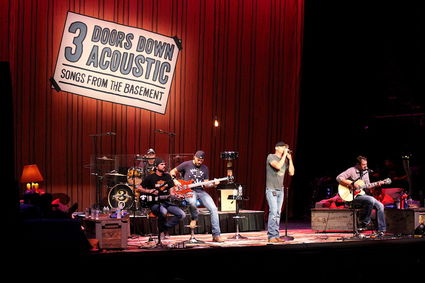 3 Doors Down returns to Southwest Louisiana in 2019 with its acoustic “Back Porch Jam” tour. Tickets go on sale Friday, Nov. 9, at http://www.goldennuggetlc.com. The band also has VIP packages available through its website at http://www.3doorsdown.com.

The new year is already shaping up to be a memorable one for live music as 3 Doors Down just added a showcase to the growing schedule.

3 Doors Down announced earlier this week it was bringing its acoustic “Back Porch Jam” tour to the Golden Nugget Casino in Lake Charles, La., on Saturday, March 2, 2019. Tickets are $30-$70 each and go on sale Friday, Nov. 9. Tickets can be purchased online at http://www.goldennuggetlc.com. The band is offering VIP packages as well through its website at http://www.3doorsdown.com for those who are interested in a more up close experience.

Well known for it’s energetic songs and stage show in a normal concert setting, the band has become highly sought after for its stripped down acoustic tours as well.

The band brought its very similar “Songs from The Basement” tour to the Jefferson Theatre in Beaumont in 2014 and sold out rather quickly as fans sought the opportunity to be part of the show by sitting on sofa’s and other chairs on the “back porch” with the band as they performed to the audience.

The most recent studio release by 3 Doors Down is the March 2016 album, “Us and the Night,” and its subsequent tour included a stop at the Golden Nugget in June 2017.