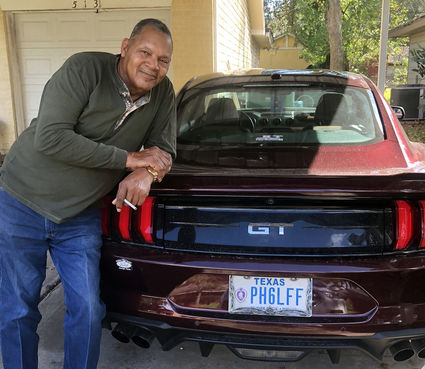 Cutline: Willam Felix stands by his Ford Mustang which has Purple Heart plates. Felix was shot in the ankle, shoulder and had schrapnel in his face while fighting in the Vietnam War and serving in the U.S. Army. Photo by Debby Schamber

William Felix was just 18 years old in 1966 when he was drafted into the Army to fight in a war which would leave him permanently scarred in more ways than one.

The Vietnam War began in 1954 after a chain of events protracted conflict which pitted the communist government of North Vietnam, known as the Viet Cong, against the government of South Vietnam and its principal ally, the U.S. The war was also a part of the Cold War between the U.S.. and the Soviet Union and their respective allies.

At the heart of the conflict was the desire of North Vietnam, which had defeated the French colonial administration of Vietnam in 1954, to unify the entire country under a single communist regime modeled after the Soviet Union and China. However, the South Vietnamese government fought to preserve a more closely alignment with the west.

Meanwhile, the Soviet Union and China poured weapons, supplies, and advisers into the North, which in turn provided support, political direction, and regular combat troops for the campaign in the South. The costs and casualties of the growing war proved too much for the United States to bear, and U.S. combat units were withdrawn by 1973. In 1975 South Vietnam fell to a full-scale invasion by the North, according to the Brittanica.com.

Felix fought for his life continuously in the hot, humid and rainy jungles of Vietnam and could never let his guard down.There was nothing the enemy would not do to cause harm to the U.S. military. Sometimes, what appeared to be innocent, local citizens were actually discovered to used as a front to get to the U.S. military. Another under handed tactic on behalf of the enemies was to use children wearing backpacks filled with bombs. These acts would cause nightmarish thoughts to Felix for years to come.

Gun fire was not the only threat to the troops. There was also dangerous wild life such as black mambas, tigers or scorpions posing a threat. Although he received painful stings from a scorpion, Felix never let it stop him from what he set out to do which was fight in the war and come home alive to his family.

Armed with various weaponry and after receiving the training to operate them he defended himself. He was always armed with his .45 handgun but also used a M14 Service Rifle or a 60 caliper machine gun in the field. He says he can still hear the deafening sounds of the large machine gun which he carried over his shoulder. Once he got to his destination, he would set the machine gun up on a tripod and begin firing.

In 1968, Felix was in the field fighting when he was struck by a bullet. The impact left only the top part of his boot on his calf intact as the bullet tore through his right ankle exposing the rest of his foot. As he lay in the bunker receiving medical care, an officer came in and told the soldiers all who could walk to get back out there, Felix said.

"I had to crawl, but that beat dying," Felix said. "So I went back to shooting."

Later the same day, Felix was shot again. However, this time he was shot in the back near his shoulder. His facial area was covered in shrapnel too. This time he was forced to wait until he could be retrieved. He was in a "hot zone" and it was not safe to get him which forced him to wait for two days.

After a hail of gunfire from eight helicopters down onto the field, the area was flooded was troops and he was transported back to a medical hospital. Once in Da Nang he had surgery to remove the shrapnel from his face and partially fix his foot. He later had additional surgery on the USS Repose. The USS Repose was a Haven-class hospital ship in service with the U.S. Navy.

During this time, Felix says he received very frequent injections to stave infection. Although, painful, they worked.

After leaving the ship he went to another hospital in the Philippines before being sent back to the United States. Eventually, he was closer to home at Fort Polk in Louisiana to receive physical therapy. Felix was given a 90 day convalescent leave to learn how to walk on crutches better.

On his was home he stopped at a cafe in Leesville, which is near the base, to get a hamburger. Still in his uniform he entered on crutches and tried to place an order. Instead of welcoming the wounded soldier home, he was met with racial slurs and a refusal to serve him. The worker called the MPs from the base and when they arrived they told him to "just go on home."

But, he was not done yet. Felix "re-upped" into the Army and served a total of six years.

He was awarded the purple heart medal with an oak leaf cluster by General Thomas Aldridge. The purpose of the medal is as an award for those wounded or killed in the service of their country. An Oak Leaf Cluster is granted to a member of the U.S. Army or Air Force and has been previously wounded and who already has a Purple Heart.

Felix said he was not met with a hero's welcome upon his return which was very common for soldiers of his era. However, he does not mind sharing his story in hopes it will inspire someone else.

The numerous horrors he saw during his tour in Vietnam remain with him. He is unable to talk about the details as they bring tears to his eyes as he recalls the friends he lost and the sorted details of their all too brief life.

Tears fill his eyes every time he hears Taps being played. As soon as he hears the first note his eyes swell with tears.

"It's because it means last call," Felix explains.

Felix has a permanent scar on his nose where the shrapnel once protruded from his face and has a constant reminder of the ankle injury as he suffers from neuropathy. But, he also suffers from the "very real" Post Traumatic Stress Disorder.

"It's worse than the neuropathy," Felix said.

In 1982 the Vietnam Veterans Memorial was dedicated in Washington, D.C., inscribed with the names of 57,939 members of U.S. armed forces who had died or were missing as a result of the war. Over the following years, additions to the list have brought the total past 58,200.

Upon his return to civilian life, Felix did his best to take care of his growing family of 7 children. He used his wit to own a business and to work at DuPont as an operator for 30 years. He has since celebrated 15 years of retirement and 11 grandchildren.