Bridge City Christmas season should be merry and bright 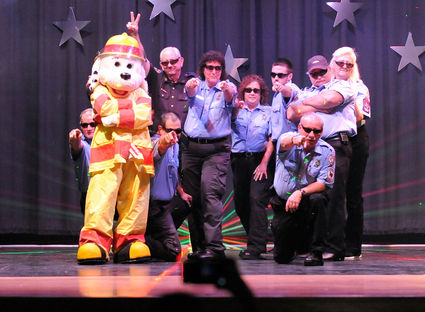 Cutline: Members of the Bridge City Police Department and Bridge City Volunteer Fire Department perform their rendition of "Jingle Bells" during the 2015 Light of the World community Christmas program.

Just the right thing to get you in the Christmas spirit.

The Light of the World holiday Christmas performance will be part of the holiday kickoff Dec.7-8. The event will start at 6:30 p.m. on Friday, Dec. 7 at Bridge City High School. Admission is $5 per person with all proceeds benefiting the Bridge City/Orangefield Ministerial Alliance.

The following day, Saturday, the 10th annual Christmas Light Parade, sponsored by the Bridge City Chamber of Commerce, will start at 6 p.m. It begins at the First Baptist Church of Bridge City and proceeds to Bridge City Elementary School.

Immediately following the parade Bridge City Bank, at 701 W. Roundbunch Road, will show the movie "The Grinch" outdoors in the field behind their building.

Light of the World organizer, Terri Gauthier, said GLOW — Go Light Our World — a civic organization, will coordinate on the program. GLOW is designed to use the gifts and talents of the youth in the community to provide an opportunity to benefit those who are less fortunate.

"I call it a performance with a cause, not just for applause," Gauthier said. "Project GLOW is created to being a holiday tradition in our community, with a beautiful Christmas presentation, illustrating the true meaning and the heart of Christmas."

Those performing will be:

• A guest performance by the BCHS Drum Line

Gauthier added there possibly may be additions to come.

The first Light of the World was held in 2003. It was held every year until Hurricane Ike hit. The program restarted in 2015.

The Boy Scouts of America will present the Colors, a minister from the Ministerial Alliance will give the opening prayer and Kirk Ellender, former BCISD trustee, will emcee the event.

"It's a beautiful program and it's a wonderful event to start the holiday season giving to those in need," she said.

Turning to the Christmas parade, the mayor's trophy and a $200 prize will be awarded for best "One Starry Night" themed entry. Decorating in theme is not required to participate. The entry fee is one new toy per person. Toys are distributed to needy children in the Bridge City/Orangefield Ministerial Alliance.

Applications are available online at http://www.bridgecitychamber.com or they can be picked up at the chamber office, 150 W. Roundbunch Road. The entry deadline is December 3 at 5 p.m.