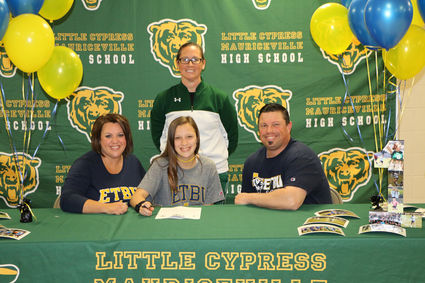 Kayla Nichols, Little Cypress-Mauriceville High School soccer standout, signed today to play with East Texas Baptist University in Marshall when she begins her college career in the fall of 2019. Her academic studies with be geared toward a degree in nursing upon graduation.

Kayla currently also plays for Houston Dash, a distinguished select club organization, and works with great trainers that have given her this outstanding opportunity to be recognized for her tremendous talents that have propelled her into the collegiate realm of playing soccer.

Jose Alvarado, Houston Dash club trainer says, “Kayla is a speedy Center attacking Midfielder with an eye for goal. She loves creating scoring opportunities by creating the shot herself or by breaking the line by making the final pass. This season Kayla has scored 12 out of 34 team goals in six games. Her team is currently sitting at the top of the United Soccer Clubs "A Bracket," Houston's strongest league.”

Kayla is surrounded by parents Jennifer and Chris Nichols (seated) and Coach Cammie Palmer as she signs to play with East Texas Baptist University on Wednesday afternoon.