Ford Park was the place to be this past Saturday night as several thousand country music fans from Southeast Texas and Southwest Louisiana turned out for what can arguably be considered the best country music concert of the year at the entertainment complex.

The annual Cody Johnson and Friends concert, which was held inside Ford Arena in Beaumont, was a night of great country music and entertainment. Johnson, a Texas country favorite, headlined the event and brought a few special guests along, such as Aaron Lewis, Zane Williams and Dustin Sonnier.

Johnson, affectionately known as CoJo to his fans and friends, used a spectacular stage show and lighting display to enhance his musical performance for nearly 90 minutes of rowdy, foot stompin’ fun.

Whether it was his well-known material such as “With You I Am,” “Wild as You” or the highly popular “On My Way to You,” or even new songs such as “Dear Rodeo” from his forthcoming January 2019 release “Ain’t Nothin’ to It,” Johnson’s prowess as a true entertainer and headliner was on full display for his faithful followers.

It’s obvious Johnson’s popularity is on the increase, so look for big things in 2019 and beyond for this rising star.

Supporting Johnson this year was none other than rocker turned country boy Aaron Lewis. 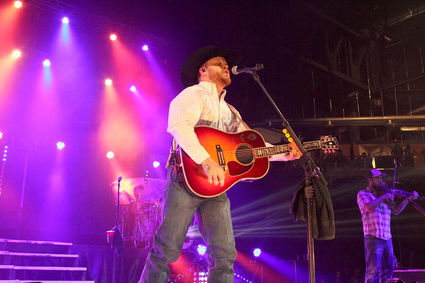 As well-known and successful as Lewis has been as the vocalist and rhythm guitarist in the rock band Staind for more than 20 years, he appears to have achieved an equal amount of success as a country artist over the past several years.

Although the majority of those in attendance were easily under the age of 30 this night, Lewis’ brand of country was right at home in Southeast Texas this night with his tunes “Country Boy,” “Granddaddy’s Gun,” “Folded Flag” and “Mama,” as was his new song “Reconsider” from his forthcoming new album in 2019.

Lewis didn’t forget his rock side, albeit both songs had a bit more of a country vibe this night, as he and his band performed the Staind classics “Right Here” and “It’s Been a While” to large applause.