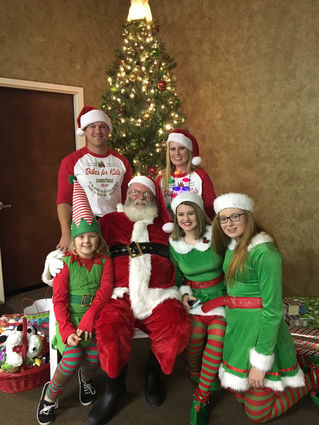 Cutline: The Bridge City Police Department is getting ready for their annual Bikes for Kids Christmas event. They are still collecting bikes, gifts and looking for volunteers. Pictured from a previous event is: Santa, Brittany and Steve Hilton, Izzabelle Brooks, Khloie Brooks and Kiersten Hilton.

After a Hurricane Harvey forced the Bridge City Police Department to cancel the Bikes for Kids in 2017, the festivities are back on track and everything is looking shiny and bright for 2018.

"We are excited to get back into this again," said Brittany Hilton, Bikes for Kids Organizer and BCPD officer.

This year the event is scheduled for 6 p.m. December 22 at the Bridge City Community Center.

However, Hilton says they are still in need of many items for the children attending the event and is hoping to collect donations to fill the many gift needs.

What began as a simple request has become something much larger but also a way to make a child’s Christmas merry and bright. Initially, Hilton was asked by someone wanting to help out to find about 10 children in need of some Christmas gifts. The person was wanting to donate 10 bicycles. Hilton began her search for the children and posted a message on Facebook. She found the 10 children, plus many more since times have been hard as people struggle to make ends meet.

The names just kept coming and the list growing larger. At one point she ran out of bicycles and gifts to give to the children. But, this did not stop Hilton as she worked to collect more. In the end, 43 bicycles were given away. In addition to the bicycles, each child received a helmet, a stocking filled with goodies and a bag of wrapped gifts.

This was two years ago and the list continues to grow and is up to 50 children needing a Merry Christmas.

According to Hilton, they have already received small bicycles and tricycles, but are need of bicycles for children in the 8 to 10 year old range.

In addition, they are needing bicycle helmets for all ages to ensure the safety of the happy riders. Plus, they are in need of Christmas stockings and stocking stuffer gifts.

Unwrapped gifts are needed too for children of all ages including infants. Hilton is hoping to include the siblings of the bicycle recipient so no child is left out of the fun. But, Hilton cannot accept used toys.

One more important need for the event is volunteers to make the event special and fun for all.

This year the events will include spectacular booths such as face painting, a snowball toss and attendees will also have the opportunity to make snow.

Plenty of yummy treats will be available for the children such as cotton candy and popcorn.

The event would not be complete without Santa Claus and his elves. Pictures made with Santa are available.

For more information on the event, Hilton can be contacted at 409-474-3186. Donations are also accepted at BCPD located at 110 Rachel.

The community wide event is for everyone to enjoy.

"Come and see the kids and share in a little bit of Christmas cheer," Hilton said.