Church, pastor give 'home-grown' thanks 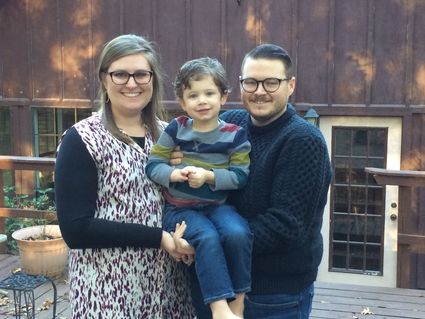 Cutline: Ryan Chandler, pastor of Orange’s Trinity Baptist Church, wife Amy and 3-year-old son Beckham, pose for a photo in the backyard of their new home.

Ryan Chandler lit the kindling in his fireplace for the first time in the first home he and wife Amy had ever purchased just a few days ago.

As he did, the pastor of Orange’s Trinity Baptist Church told how he looks forward to an open house for church members so he can give thanks to the folks who helped the young couple make their down payment.

“This will be our chance to say, ‘Thank you,’” Chandler said.

“We want everybody to know where we live and that we’re available. When you need us, you can call on us.”

The thanks is more than mutual, explains former Orange mayor and current Pinehurst councilman Dan Mohon.

He not only conveyed the members’ whole-hearted 2017 job offer to Chandler, but a year later headed up the effort to help Ryan, Amy and 3-year-old son Beckham purchase the home of their dreams in north Orange.

“We had talked with the pastor at First Baptist Church in The Woodlands who suggested we invite his youth minister to come and preach,” Mohon recalled.

“That was Ryan. Three months later, he was our full-time pastor. We felt he was a perfect match. God brought us together.”

It was a challenging beginning, because the Chandlers’ arrival in Orange coincided with that of Tropical Storm Harvey.

The slow-moving downpour that remained of a Category 4 hurricane produced more rainfall – more than 60 inches in some areas – in a week than any other “rain event” in U.S. history.

Like much of Southeast Texas, Trinity Baptist Church’s campus at 1819 N. 16th St. was flooded.

“We moved to Orange on Thursday and Harvey hit on a Tuesday,” Ryan Chandler said.

“September 10th was my first Sunday. By then, the building had been gutted, so we asked everybody to bring lawn chairs. We did that for a long time. Slowly but surely, everything came back together.

“We never said, ‘Thank God for Harvey, but we really do believe God brought good to it, and has redeemed the situation.

“Both of us believe we are where God has called our family.”

The Chandlers rented a place to live their first year in Orange. Tthen, with the help of local Realtor Debbie Hughes, began looking for a house to call home.

“The church found out we were wanting to buy a home and they asked us if we needed help with the down payment,” Ryan Chandler said. “We said, ‘We’ll manage it somehow.’”

Mohon said about 80 percent of the families in the 200-member congregation contributed to the offering to help the Chandlers with the down payment.

“They’re a young couple that had never bought a house before,” Mohon said. “I had the idea for us to help out and our church members responded.”

Chandler said “it was close to $10,000” church members presented his family earlier this year.

“We were very surprised. One Sunday, they called us up to the front and said, ‘We love you and we want you to stick around,’” Chandler said.

“I was just blown away. They told us, ‘Whatever you need of that for the down payment, use it. Whatever’s left over, use it to fix up your home.’”

“We didn’t pay a dime to move. They helped with everything,” Amy Chandler said. “Even when we painted our house, they came and helped.

“It’s a true community helping each other out.”

Ryan Chandler grew up in Poteet, south of San Antonio, and Amy, now a nurse at Baptist Hospital-Beaumont, grew up in Friendswood.

“We are very blessed and fortunate to have a young man who is as sharp as Ryan Chandler,” Mohon said.

“Many things impressed me about the man, but one was that for five years he drove back and forth from The Woodlands to Waco to get his masters.”

When Ryan Chandler first met the members, he was there as a fill-in pastor.

“Amy and I really did find a strong connection to these people. To us, church is our community. I don’t know what people who don’t belong do.

“This church is just naturally good.”