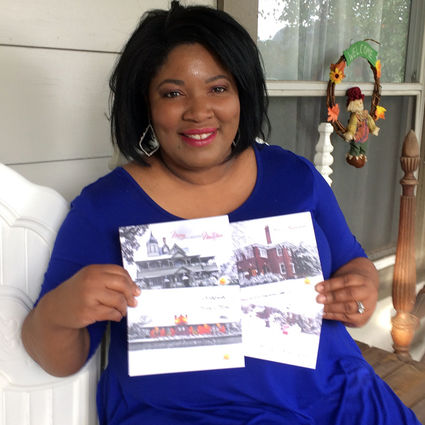 Tricia Stroud shows off some of her photographs transformed into Christmas cards for sale by the Service League of Orange. RECORD PHOTO: Dave Rogers

If you live in Southeast Texas, you usually have to settle for dreaming of a white Christmas.

But thanks to Tricia Stroud, residents can share a white Orange with their loved ones this Christmas season.

Stroud, a local portrait photographer who doubles as a West Orange-Cove school board member, was ready last Dec. 8 when Southeast Texas received a rare inches-deep snowfall.

Her photos of old Orange landmarks covered in snow have been printed on fine linen paper and are for sale as Christmas cards, with the proceeds going to help fund the community outreach activities of the Service League of Orange.

“Early that morning, kids on my street were outside playing in the snow,” Stroud recalled. “It was coming down real good.

“So my neighbor and I decided to go down to Old Orange and see what it looked like. I grabbed my camera and we drove around so I could get some pictures.”

Stroud’s keepers include a snow-capped photo of the Stark House, one of the Orange Train Depot, one of City Hall from a distance, another closed-up on the snow-covered Santa and sleigh in front of City Hall. The final one of the five is of the railroad tracks near the Depot.

“A lot of people got out and took pictures with their cell phones,” she said. “I’ve seen some good cell phone photos. But I’m so glad, I grabbed my camera and got a good resolution.”

A set of five folded cards and matching envelopes is on sale for $20 at the Service League’s Christmas Market in the gift shop of Baptist Hospital-Orange, at Tru Colors Art & Design, 1201 N. 16th St., and from a Service League member.

A special feature of the card is the image is printed front-and-back. One sides includes Christmas greetings, the other has no words so it is suitable for framing.

The Christmas Market runs from 9 a.m. to 2 p.m. Monday through Friday through December.

Stroud has been a professional photographer off and on since she was 19. She has taken studio photos of babies, kids and adults for Sears and Walmart in Orange and J.C. Penney in Beaumont.

A new member of the Service League, Stroud was quick to do her bit for helping the group help others.

“I got invited to join Service League and they were talking about fundraisers,” she recalled. “I had been thinking about Christmas cards, so I threw this idea out and donated the images.

“I felt compelled to do it. God will bless me in the long run.”

The Service League is in its 65th year and will host its 62nd Toy Coffee from 10 a.m. to 2 p.m. Dec. 6 at 602 W. Orange Ave. Admission is a new unwrapped toy, to be passed on to the Salvation Army so all children may have a Merry Christmas.

In addition to the annual Toy Coffee, the Service League hosts a bingo program at area nursing homes called “Elder Fun.” Members working together with the Stark Museum put together a visual arts program they take to elementary schools.