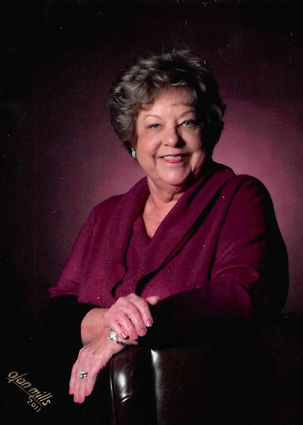 Funeral services will be held at 11:00 a.m., Tuesday, November 27, 2018, at St. Henry’s Catholic Church in Bridge City, Texas. Officiating will be Father Steve Leger. Burial will follow at Hillcrest Memorial Gardens in Orange.

Visitation will be held prior to the service, beginning at 9:00 a.m., at Claybar Funeral Home in Bridge City.

Born in Kaplan, Louisiana, on April 4, 1937, she was the daughter of Dulva “Besho” Compete and Laura (Naquin) Compete. Carol worked as a secretary and an agent at Allen E. Brown Insurance Company in Orange. She enjoyed cooking, yard work, and camping. Carol was a devoted wife for 57 years and was a loving mother and MeMe. She loved spending time with her family. Carol will be missed by all who knew and loved her.

She was preceded in death by her loving husband, Rodley Joseph Faulk; and her parents, Dulva and Laura Compete.

She is survived by her children, Kent Faulk and wife Trisha of Orange, Tami Faulk Guidry and husband Richard of Orange, and Dawn Faulk of Houston; her grandchildren, Kaleb Faulk and wife Lindsey, Katie Faulk, Taylor Faulk and Trina Ford, Amy Rawls and husband Jesse, Mallory Edgerly and husband Alex; her great-grandchildren, Aleecia, Benjamin and Grace Faulk, Hayes Rawls; her siblings, Dorothy Romaine of Houston, Linda Conner of Lake Arthur, Louisiana, and Patty Doise of Kaplan, Louisiana; and her numerous nieces and nephews.

The family would like to extend their sincere gratitude to Carol’s caregivers, Laura, Maura and the rest of the staff at Kindred Hospice.