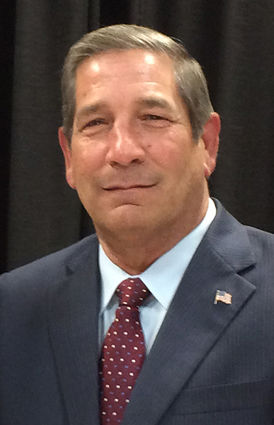 With Commissioner Barry Burton absent, the vote was 4-0 to “support and join” the city of Vidor in requesting the GLO to eliminate its requirement that local government entities choose either “buyouts” or “acquisitions” of properties to receive Community Development Block Grant Disaster Relief funds.

Burton was in favor of the move when it first came up a week ago, only to be tabled then for a polishing of the resolution’s language.

Buyouts and acquisitions are two options offered by GLO to towns and counties impacted by Tropical Storm Harvey in 2017. They are for purchasing repetitively flooded homes or other properties in flood plains.

But under the rules, each entity is required to choose just one. Not both.

“I didn’t understand the decision about having one or the other,” said Vidor mayor Robert Viator, who asked for the county to support Vidor’s resolution on Nov. 20

“This will just give us another avenue to allow us to help our citizens.”

In the rules rolled out by the GLO, with the “buyout program,” homeowners will be paid their home’s pre-storm value. The city or county that buys it tears down the structure and permanently removes the real estate from its tax roll.

The second is called the “acquisition program” and it pays the homeowners lesser, post-storm values but also up to $30,000 to relocate inside the city or county.

In this option, the city/county can resell the land to a real estate developer who can rebuild on the land after elevating the property to the required height.

“I don’t have exact numbers,” Viator said when asked how many homeowners would join either program.

“But we have some projects we’re looking at, some areas that might allow us in the future to make detention ponds, in able to help us eliminate some future flooding in some areas.”

In other action Tuesday, Joel Ardoin, the county’s emergency management coordinator, said a total cost estimate for FEMA eligible repairs and replacements at Claiborne West Park was between $458,000 to $623,000.

He said he hoped to have all his paperwork submitted by January and an answer from FEMA by March.

“We’ve still got to get plans before we can start construction,” Ardoin said. “It’ll be some time to get the park back together.”

The county park is open, but a new park office, repair to small pavilions and restroom facilities, and bridge improvements to meet ADA requirements, are on the to-do list.

Also Tuesday, commissioners okayed $397,000 in checks to pay bills, including $157,000 for one month of retiree health insurance premiums.

They agreed that Clark Slacum, the county engineer, should work to amend a Road Use Permit Bond required of heavy equipment operators, such as oilfield drillers.

Currently, the bond is $40,000, payable to the county for road damage. Slacum says the actual cost to the county to repair a mile of roadway is $150,000 plus.