BC café collecting cards of love for terminally ill child 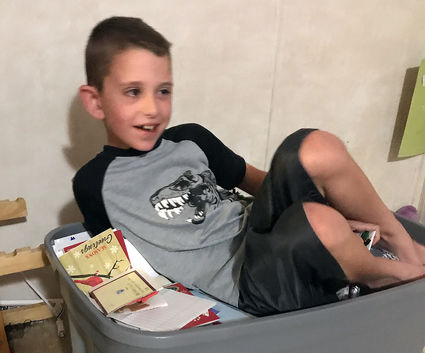 Elements Cafe and Bakery is collecting Christmas cards for Drake Quibodeaux who has been diagnosed with DIPG which is a terminal brain cancer. He wants to “feel the love” this Christmas.

Elements Cafe and Bakery is collecting Christmas cards for Drake Quibodeaux who has been diagnosed with DIPG which is a terminal brain cancer. He wants to “feel the love” this Christmas.

It is not uncommon for Elements Café and Bakery in Bridge City to help out when they can and after hearing about eight-year-old Drake Quibodeaux who has terminal brain cancer, they once again are doing what they can to help.

"We heard about it and wanted to help," said Alex Bickham, owner of Elements. "We like doing things in the community."

Drake was diagnosed with Difuse Intrinsic Pontine Glioma, after a series of seizures while driving the family boat in March. Within the first six hours, Drake could no longer walk, talk or swallow.

To find the cause, Drake underwent a series of tests. Drake's mother saw the panic on the technician's face during the two hour procedure. After more dye was injected they were able to get a better picture of the deadly tumor.

Drake's parents met with doctors and were told to take him home and "make memories."

They took him home, but they were not done yet. They took him to Texas Children's Hospital in Houston where he began taking high doses of steroids and seizure medication. He also started on 30 rounds of proton radiation. Plus, Drake is undergoing chemotherapy six times per month. He is now able to walk and talk again.

Drake's parents are doing all they can to make him happy because they know the odds are stacked against Drake.

According to his mother, Danielle, only five percent of children diagnosed with DIPG survive a year and the odds of surviving two years drops to one percent. The median survival rate is 9 to 12 months. Wednesday marks nine months for Drake.

With the holidays approaching, Drake's parents asked him what he wanted for Christmas. He replied, "cards." When they asked how many he told them his favorite number, "190." This is his go to number for everything and when asked how many slices of pizza he wants, he may still say 190, Danielle said.

As word got out and the cards started arriving, Drake told his parents he could feel the love with each one. Some cards come with much more such as a signed jersey from Dak Prescott, of the Dallas Cowboys, or a duck call for when Drake goes hunting again some day.

The handmade cards from other children who have included their lunch money or allowance touches Danielle's heart.

"We didn't ask for donations," she said. "Just cards."

After each card is opened, they are hung on the wall for Drake to see and "feel the love."

For now, Drake's parents rely on their faith to get them through this. But, to see their little boy happy when new cards arrive is priceless.

Elements Café and Bakery located at 1055 Texas Avenue is accepting cards through Friday at 7 p.m. They are open daily from 7 a.m. to 5 p.m. On Friday they plan to add some special Christmas sweet treats and get them to Drake.