BC Chamber names A1 Peterson Plumbing Business of the Month 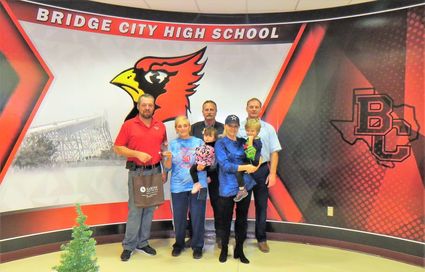 The Bridge City Chamber of Commerce is excited to announce that A1 Peterson Plumbing has been named Business of the Month for December.

Back in the day, when Donna Peterson and her husband Dick were just starting their plumbing business, they couldn’t afford a babysitter for their four kids.

A1 Peterson Plumbing is celebrating its 50th anniversary in business in Orange.

“I remember when we went to buy a sewer machine, we had four kids in the truck,” says Donna, the matriarch of the family business and who has a daughter and granddaughter also named Donna.

Mrs. Peterson also remembers when she made a splash as a “woman plumber” by showing up during career day at her kids’ school.

“Mom showed up to prove that women could work in alternative fields,” says her daughter, also named Donna Peterson.

“I heard the head guy at Gulf Chemical said ‘Call that lady plumber. She can’t be any worse than the one we’ve got out here,’” said the elder Peterson, who goes by “Mom” around the office.

It’s a busy place these days, with daughter Donna going by “Major Donna,” and sons Bill and Richard, Jr. running the industrial and commercial operations.

Dick Peterson passed away in 2006 but not before seeing his daughter become one of the first female cadets at West Point.

Dick and Mom Peterson brought their kids to Texas from the chilly climes of Wisconsin in 1968.

Dick had been stationed at the Orange Navy base during his time in the service and jumped at the chance to transfer from his job at American Bridge in Milwaukee to the company’s Port of Orange plant.

His wife suggested they should open a plumbing business on the side to help with the bills.

Dick had worked for Roto Rooter in Wisconsin, but had been fired.

“’What part of I’m not a plumber don’t you understand?’” he told his wife 50 years ago. Mom’s reply was to sign him up for a correspondence course.

“Because he was a structural draftsman [at American Bridge], he understood plumbing better than your average plumber,” the eldest Peterson said with pride.

Dick Peterson worked days at American Bridge, spent his evenings on plumbing calls and had a third job as early morning janitor at DuPont.

That’s how she became one of the first female journeyman plumbers.

Confusion over a Yellow Pages ad led the couple to go all-in on plumbing.

“We thought we were signing up for a little ad, like all the other plumbers had,” Mom Peterson said. “But when the book came out it was a half-page.

“It cost us almost $300 a month and at the time we were charging $15 to roto-rooter someone’s pipes.

“Then the phone started ringing.”

The major’s mother recalls the time Dick Peterson took time out from a long list of calls during a major freeze to help at the home of a stranger who was confined to a wheelchair.

“The next morning one of the plant managers called and said, ‘I want to thank you for taking care of my mom,” Mom Peterson recalled.

Before long, A1 Peterson Plumbing was working at just about every plant on Chemical Row. With all the changes in ownership over the years, Bill Peterson was asked recently if he could provide one of the plant managers with a diagram of the pipes on the property.

“We’re the only ones who know how the plant goes,” Mom Peterson said, chuckling.

Besides the plants, A1 Peterson Plumbing has a roster of commercial clients that include Dairy Queens and Pizza Huts throughout East Texas. Other industrial clients include Lamar State-Orange, the Stark Foundation and the International Paper paper mill.

“It’s been a great 50 years. It really has,” says Major Donna. “Except for losing dad.”

“We made a great team,” Mom Peterson says of she and her late husband. “He was the craftsman and I was the business man. Between the two of us, it worked.”